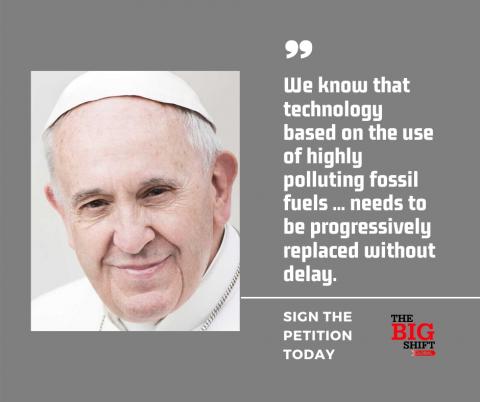 As we join Pope Francis and the global Church in celebrating Laudato Si' Week, we invite you to take action to build a better future by urging the World Bank to stop investing in fossil fuels and instead invest in renewable energy.

Take action: Sign a petition asking the World Bank to make the "big shift" toward renewable energy investments today. You can find the petition in English and Spanish.

On May 16, we launched this petition campaign with several other U.S. faith-based organizations in support of the global Big Shift campaign, a movement calling on international financial institutions such as the World Bank to shift away from investing in fossil fuels and toward supporting renewable energy.

In Laudato Si', Pope Francis wrote, "We know that technology based on the use of highly polluting fossil fuels – especially coal, but also oil and, to a lesser degree, gas – needs to be progressively replaced without delay." We are urging the World Bank to invest in making this vision a reality.

Read about the launch of this campaign in our press statement. You can also read more about this and other faith-based fossil fuel divestment efforts in this National Catholic Reporter article.

Take action today: Urge the World Bank to end its support of fossil fuels and, in this time of crisis, invest in a more sustainable future.