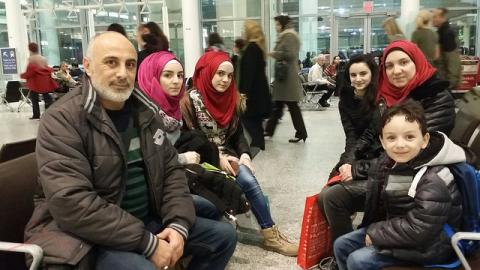 Ask your Republican House representative to sign on to a letter in support of the refugee resettlement program.

The Trump Administration has proposed to accept just 18,000 refugees into the United States in 2020 -- the lowest number of refugees to be admitted per year in U.S. history. In response, people from all over the country have voiced their support for welcoming a higher number of refugees.  A Republican congressman, Rep. Ken Buck of Colorado, has written a letter to Secretary Pompeo expressing his support for refugee resettlement in the United States.

"In our communities throughout this country, there is a long history of opening doors to assist refugees," Rep. Buck writes. He explains that refugee resettlement has long been a bipartisan program, and that the unprecedented number of refugees around the world today necessitates the United States' continued commitment to assist refugees. As people of faith, we also know it is our moral duty to welcome the stranger, especially the most vulnerable.

If you do, please click here to send an email to your representative asking him or her to sign on to Rep. Buck's letter.  In signing onto the letter, Republican representatives can show the Trump Administration that support for the refugee program is truly bipartisan.  The deadline for adding signatories to the letter is October 15th.

Read our statement on the Trump Administration's proposal to make drastic cuts to the refugee program here.