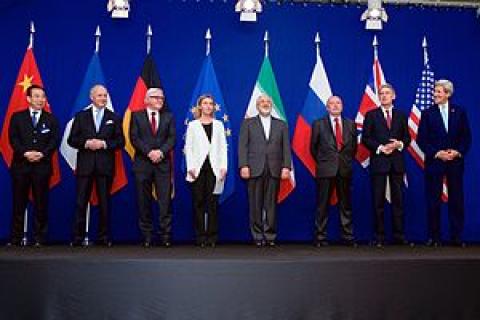 In 2015, 70 years after the bombings of Hiroshima and Nagasaki, the world community is making important moves toward nuclear abolition. Just a few months ago, the Holy See issued a ground-breaking paper entitled Nuclear Disarmament: Time for Abolition, which said, “Now is the time to affirm not only the immorality of the use of nuclear weapons, but the immorality of their possession, thereby clearing the road to nuclear abolition.”

Most recently we have seen the significant July 14 agreement between Iran, the P5+1 (the five permanent members of the United Nations Security Council – China, France, Russia, United Kingdom, United States – plus Germany) and the European Union to curtail Iran’s nuclear program. After years of tense and delicate negotiations, the signatories agreed that Iran’s uranium stockpiles will be considerably reduced, various uranium enrichment activities either will be stopped or greatly limited, and the International Atomic Energy Agency will have regular access to its nuclear facilities. In return, the crippling economic sanctions against Iran will be lifted.

It is imperative that the Iran deal enter into force without obstacles created by the U.S. Congress. We must clearly express our support for the agreement as an important diplomatic accomplishment that will make all of us safer. Congress has until mid-September to reject the deal, otherwise it will go into force.

SEPTEMBER 9: Here is the list of the 46 U.S. senators in the Democratic caucus (44 Democrats and two independents) and their positions on the deal. Use this link to see the list of U.S. House members. If your senator(s) and/or representative support the deal, please send a thank you message.

A conference call on the Iran deal was held on Thursday, August 27, with Marie Harf from the U.S. State Department, Jim Winkler of the National Council of Churches, Marie Dennis of Pax Christi International, and Friends Committee on National Legislation's Diane Randall; listen to a recording of the conference call here.

1) Call your senators and your Congressional representative to express your opinion about the Iran deal. Use the talking points listed here to shape your message.

2) Send a letter to the editor of your local paper urging your senators and representative to support the Iran deal. Use the talking points listed here to shape your message.

3) Please keep us posted about the outcome of any meetings that are held or letters that are written.

1. This important diplomatic accomplishment is a critical step toward nuclear non-proliferation and, ultimately, nuclear abolition.

2. It will strengthen the Nuclear Non-Proliferation Treaty and stimulate development of a Nuclear Weapons-Free Zone in the Middle East, a goal repeatedly supported by the nations of the world at the United Nations since 1974.

3. It is a concrete example showing how international cooperation and skilled diplomacy can be a crucial tool in preventing war and stopping the spread of nuclear weapons.

4. This agreement has the potential to reshape much of the Middle East. By ending the international isolation of Iran, the door is open for Iran to play a more active role in regional politics, increasing the possibility of a diplomatic solution to the war in Syria and leveraging political concessions in Baghdad and Damascus that could more effectively curtail the power of ISIS and avert wider Shia-Sunni conflicts.

Background on the efforts toward disarmament

2015 presents an important opportunity to advance the nuclear disarmament agenda, including the launch of negotiations on a treaty prohibiting nuclear weapons. Despite the disappointment of the Nonproliferation Treaty Review Conference in May, non-nuclear weapons states continue to emphasize their deep concern about the global humanitarian and ecological impact of an intentional or accidental nuclear exchange, as well as their impatience with the slow pace of bilateral nuclear disarmament negotiations.

There are still over 16,000 nuclear weapons in the world. A single nuclear bomb detonated over a large city could kill millions of people. Nuclear weapons are unique in their destructive power and the threat they pose to the environment and human survival. They release vast amounts of energy in the form of blast, heat and radiation. No adequate humanitarian response is possible. Even if a nuclear weapon were never again exploded over a city, there are intolerable effects from the production, testing and deployment of nuclear arsenals that are experienced as an ongoing personal and community catastrophe by many people around the globe. Nothing more decisively threatens the fabric of life than nuclear weapons, their proliferation, and the grim possibility of their use. Whether such use is by design, miscalculation or madness is irrelevant. The outcome will be the same.

Since 2010 the catastrophic humanitarian impact of nuclear weapons has featured prominently in discussions among governments and civil society organizations and a growing body of literature has emerged detailing accidents and incidents where nuclear weapons were almost used. Three intergovernmental conferences have been held – in Norway, Mexico and Austria – to elaborate on the humanitarian impact of nuclear weapons. At the third conference, the Austrian government pledged "to follow the imperative of human security for all and to promote the protection of civilians against risks stemming from nuclear weapons" and to cooperate with all stakeholders "to fill the legal gap for the prohibition and elimination of nuclear weapons." As of July 14, 2015, 113 other countries had also signed the Austrian pledge.

Nuclear weapons are the only weapons of mass destruction not yet prohibited by an international convention, even though they have the greatest destructive capacity of all weapons. A global ban on nuclear weapons is long overdue and can be achieved in the near future with enough public pressure and political leadership. A ban would not only make it illegal for nations to use or possess nuclear weapons; it would also help pave the way to their complete elimination.

Nuclear weapons programs divert public funds from health care, education, disaster relief and other vital services. The nine nuclear-armed nations spend in excess of $105 billion each year maintaining and modernizing their nuclear arsenals. Funding allocated to national disarmament efforts is minuscule by comparison, and the principal UN body responsible for advancing nuclear abolition has an annual budget of just over $10 million. It is time to redirect money towards meeting human needs.

Negotiations on a treaty banning nuclear weapons should be undertaken by committed nations even without the participation of those armed with nuclear weapons. The alternative is to continue allowing the nuclear-armed nations to control the process and perpetuate two-tier systems and treaty regimes that have no power to compel disarmament. A nuclear weapons ban would globalize what nuclear-weapon-free zone treaties have done regionally – in Latin America, Africa, the Pacific, Central and South East Asia. It would allow nations in any part of the world to formalize their rejection of nuclear weapons and help create a clear international legal norm against the possession, use, stockpiling or deployment of nuclear weapons.

Forty-two senators have expressed support of the deal, thereby guaranteeing a filibuster of the disapproval resolution.