TODAY: Show solidarity with efforts to halt mining in Honduras 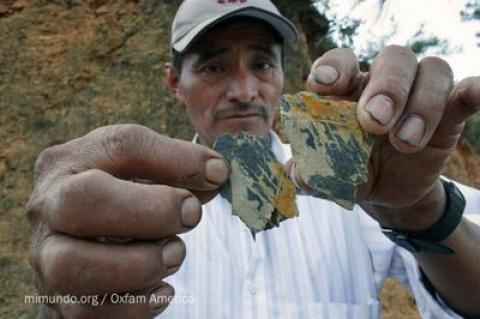 The National Coalition of Environmental Networks in Honduras is calling for urgent solidarity TODAY in order to try to halt the final debate on a mining law that does not incorporate their proposals. Passage of a new mining law in Honduras would lead to the lifting of a moratorium on new mining projects that has been in place since 2006.

Experience to date, particularly with Canadian owned mining operations such as Goldcorp’s San Martín gold mine in the Siria Valley, have convinced communities and civil society organizations in Honduras of the need for a strong mining law that will prioritize water supplies for human and agricultural use, ensure local communities and early and decisive say about projects taking place on their lands and territories, prohibit open-pit mining, and substantially raise taxes and royalties on mining that does take place. A November 2011 survey found some 91 percent of Hondurans opposed to open-pit mining and near unanimity in support of the environmental movement for a more just mining framework.

In 2009, Honduran civil society had achieved a proposed mining law that had it passed would have incorporated their proposals. But this was shoved aside following the June 2009 military-backed coup of then President Mel Zelaya and never debated.

The current lobbying for a new mining law has not included the proposals that communities and members of the National Coalition of Environmental Networks of Honduras have continued to make. The new mining law discussed in the Honduran Congress will provoke:

The debate in Congress is most likely take place TODAY, Wednesday January 23 – the National Coalition of Environmental Networks of Honduras urges you to send emails to the Honduras Congress asking for:

Please send your emails to: