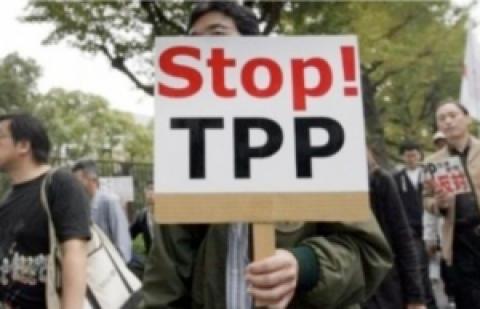 Votes on the fast track bill are not expected until the week of June 8, but members of Congress who are still undecided will likely commit this week on whether or not to grant the president (and future presidents) "fast track" trade promotion authority to negotiate international trade agreements quickly and secretly.

We oppose Fast Track because it limits debate and the opportunity for Congress to represent our voices before a trade deal is signed.

As people of faith we are called to ensure that a broad range of voices is welcome and heard at the table when major national policy decisions are made. Right now the Obama administration is negotiating the Trans Pacific Partnership (TPP) with 12 other countries in complete secrecy. The TPP will put the profits of corporations above the needs of communities fighting for labor rights, clean water, access to medicine, environmental protections, and democratic governance. Currently the voice of marginalized communities is missing from the negotiating table.

Trade agreements are important for our economy, but they must be drafted taking into account local economic, environmental, labor and political realities in the United States and within the trading countries. Far reaching agreements like the TPP should be drafted and debated by our elected representatives with input from all of society, including the faith community, not by mostly corporate lobbyists and in secrecy. The Obama administration and some members of Congress are pushing for Fast Track legislation for the TPP that will undermine the democratic process for passing legislation.

In El Salvador there is almost generalized opposition to a gold mining project by a Canadian company that could contaminate the country’s main water source. (Read a related NewsNotes article here.) The last three governments have so far refused to grant the permits in order to protect its water. The company, OceanaGold, is suing El Salvador under bi-lateral investment agreement included in most trade agreements for $300 million of unearned profits. The TPP would expand these kinds of investor rights to other industries that were previously protected. No trade agreement should put the profits of corporations over the health and livelihoods of communities.

My name is (NAME). I'm a constituent from (CITY). I'm calling to let you know that trade deals are too important to be negotiated in secret. I urge you to stop fast track. Vote NO on H.1890, the Bipartisan Congressional Trade Priorities and Accountability Act of 2015.