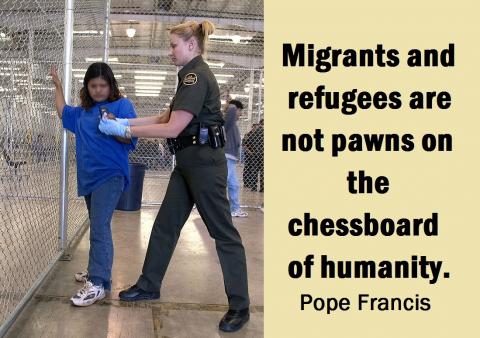 It's happening again! U.S. immigration authorities are targeting Central American women and children in another round of immigration deportation raids.

Take action now! Send a letter to President Obama to tell him to stop the raids.

Reuters reported on May 12 that U.S. immigration officials plan "a month-long series of raids in May and June to deport hundreds of Central American mothers and children found to have entered the country illegally" after January 1, 2014.

In 2014, tens of thousands of women and children, including unaccompanied minors, from El Salvador, Honduras, and Guatemala, crossed the U.S.-Mexico border in a desperate attempt to escape extreme violence, corruption, and poverty. Thousands more have sought refuge in the United States since then.

Act now to tell President Obama to stop the raids against Central American children and families!

“Migrants and refugees are not pawns on the chessboard of humanity,” Pope Francis said. “They are children, women and men who leave or who are forced to leave their homes for various reasons, who share a legitimate desire for knowing and having, but above all, for being more.”