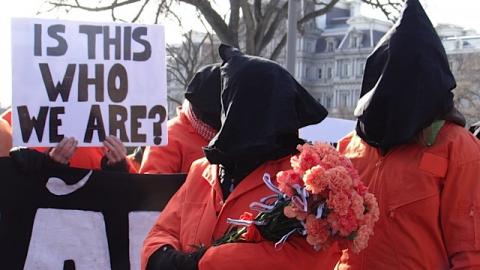 January 11 marks the 14th anniversary of the opening of the detention facility at the U.S. Navy Base at Guantánamo Bay, Cuba.

Earlier in January, two Yemeni detainees and a Kuwaiti detainee were transferred out of Guantánamo, bringing the number of remaining detainees at the detention center down to 104. Forty-five of those still held - many for over a decade - have been cleared for transfer yet remain behind bars.

Seven years ago, President Barack Obama signed an executive order to close Guantánamo within a year. Time is running out for President Obama to fulfill this promise.

The National Religious Coalition Against Torture asks that you sign this petition to President Obama, to urge him to act quickly and decisively and close Guantánamo. Each detainee must either be charged and fairly tried in federal court, or be released to countries that will respect their human rights.

Add your name to this WhiteHouse.gov petition today.

Photo: Close Guantanamo demonstration and prayer vigil in front of the White House. Photo by Debra Sweet / Licensed CC BY 2.0