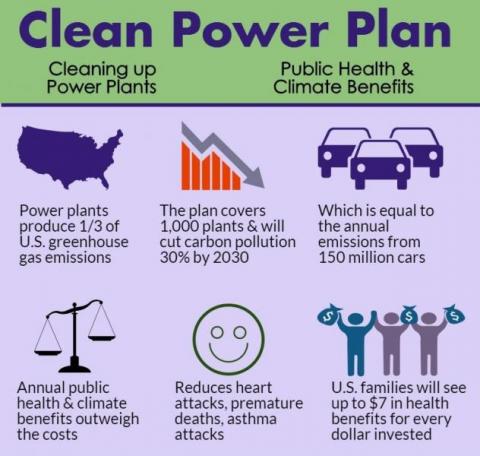 The Clean Power Plan – one of the most robust U.S. policies to curb carbon pollution, meet our global climate commitments, and transition the U.S. to a renewable energy future of green jobs and cleaner energy – is in jeopardy.

The Environmental Protection Agency (EPA) is considering a repeal of the Clean Power Plan. The agency is collected comments from the public on the proposed repeal and the response has been massive! The EPA has just extended the deadline for submitting comments until April 26.

Take action: Submit your comments to the EPA to protect the current Clean Power Plan

The plan’s goal is to reduce carbon pollution from the United States’ largest source, the power sector, by 32 percent by 2030 relative to 2005 emission levels. Many states are already on their way to meeting, or have already achieved, their initial goals in the plan. To quit the plan now would be a major step back by the United States, the largest historical emitter of greenhouse gases. Use our form to submit your comments before April 26.

Also, the EPA will hold three listening sessions on the proposed repeal of the Clean Power Plan. For more information, visit the EPA website.

Just as those of us in the United States have witnessed historical wildfires and hurricanes exacerbated by climate change, Maryknoll missioners have witnessed the impacts of a changing climate in the countries they serve.

Here are just a few examples of what Maryknoll missioners are witnessing:

“The November 2013 typhoon Yolanda (Haiyan), regarded as the typhoon of the century, left more than 5,000 dead, still thousands unaccounted or missing and millions of homeless. These storms cost the Philippines billions of dollars in economic damages.”
– Maryknoll Sister Marvie Misolas, Philippines

"The Turkana tribe in northern Kenya herd goats, cows, and camels because the climate does not support farming.  During times of droughts, the livestock starve and many people migrate south to the town of Kitale. They live in squalid slum camps on edge of town and their children go to the streets."
– Maryknoll Lay Missioner Russell Brine, Kenya

"Because of the water rationing, people are storing water and this has been a contributing factor to a dengue epidemic."
– Kathy Bond, Sao Paolo, Brazil, MKLM

This is the last chance to submit comments to protect the current Clean Power Plan. Please take action!