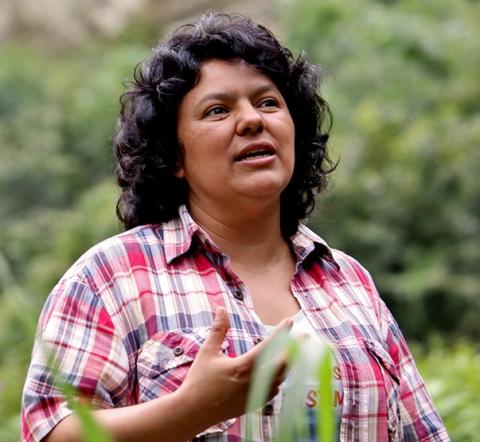 We are shocked and saddened to learn of the assassination of Honduran environmental activist and indigenous leader of the Lenca people, Berta Cáceres.

Berta Cáceres’ faithful leadership of the Council of Indigenous Peoples of Honduras (COPINH) reflected not only her dedication to nonviolent resistance to illegal logging and mega-projects that devastate the environment but also her deeply felt belief in the rights of indigenous communities to their land and livelihoods.

Send a letter to U.S. Secretary of State John Kerry, urging him to assist the government of Honduras in finding and holding accountable the murderers of Berta Cáceres.

As co-founder and coordinator of COPINH, Cáceres organized communities in peaceful protest against illegal logging and violent oppression from the Honduran police forces, most recently in the Gualcarque River basin. Cáceres was awarded the Goldman Prize after she led a peaceful campaign to stop one of the world's largest dam builders from constructing the Agua Zarca Dam, which would have cut off the ethnic Lenca people from water, food and medicine.

Pope Francis highlights in Laudato Si’ the sacredness of land for indigenous peoples and the importance of local ecosystems to cultural identity. The pope names environmental exploitation and degradation as not only harmful to creation but also to social structures. Large-scale hydroelectric dams and other large-scale development projects often cause irreversible harm to the Earth and impoverished communities. The proposed Agua Zarca dam is no different.

We join the international environmental advocacy community in mourning Berta Cáceres, and extend our deepest condolences to all of Berta’s family, friends, and colleagues.

Contact Secretary Kerry today, to demand justice for Berta Cáceres and the indigenous people of Honduras.