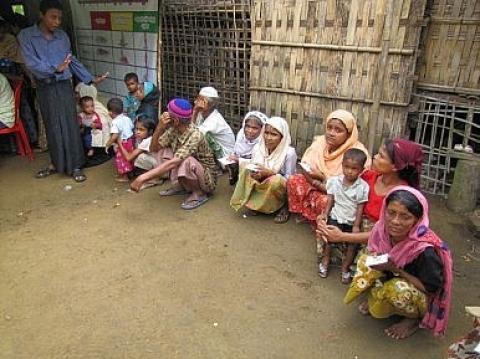 Peace be with you!

Each year the International Day of Peace is observed around the world on September 21. The theme for 2017 is "Together for Peace: Respect, Safety and Dignity for All."

'For all' means even for the least of these, which includes the Rohingya people in Myanmar, the Southeast Asian country formerly known as Burma. The Muslim Rohingya are often called the most persecuted minority in the world, unable to claim citizenship in a majority-Buddhist country that refuses to recognize them.

Since August 25, more than 400,000 of the estimated 1.1 million Rohingya in Myanmar have fled to nearby Bangladesh. The United Nations’ top human rights official has said it looks like a “textbook example of ethnic cleansing.”

A UN report released in February concluded that the military in Myanmar is leading a violent campaign against ethnic minority groups. Some ethnic groups have formed rebel armies. News outlets reported that a newly formed rebel group, Arakan Rohingya Salvation Army, targeted a police outpost in late August, killing twelve and triggering this latest catastrophic crackdown. Rohingya refugees who have made it to Bangladesh in recent days have described soldiers, aided by Buddhist villagers, violently emptying and razing their villages in an attempt to hound them out of the country.

Prayer for the Rohingya​:

The Elijah Interfaith Institute in Australia offers a prayer for the Rohingya.  May our prayer stir us to action for justice and humanity. http://elijah-interfaith.org/news/prayer-for-rohingya

A provision in the U.S. Senate’s current draft of the National Defense Authorization Act (NDAA) would increase U.S. military engagement with Myanmar. Urge your members of Congress to cosponsor a bipartisan amendment (SA 607) to strike this language and to suspend all U.S. financial aid to Myanmar’s military. Read the letter 125 faith leaders sent to Congress.

The UK government suspended its financial aid to Myanmar’s military on September 19.

Tell Congress that the United States should do the same. Thank you.