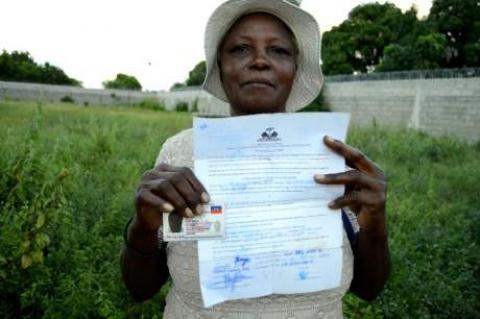 The following alert is from our colleagues at ActionAid USA.

January 12 marks the fifth anniversary of the devastating earthquake that hit the Haitian capital of Port-au-Prince, shaking the city to the ground. Approximately 316,000 people lost their lives and 1.5 million were left homeless.

In the aftermath of the earthquake, $9 billion was pledged by international donors to help Haiti "build back better." Yet, a year later, more than 1,000 people lost their land and livelihoods when construction of the U.S.-backed Caracol Industrial Park began.

At least a quarter of USAID’s emergency and relief funds were used for the construction of the Caracol Industrial Park.

Tell Haiti Special Coordinator Thomas Adams that USAID-supported projects must not force farmers off their land.

In January 2011, representatives from the Government of Haiti arrived near the village of Caracol with trucks and bulldozers. Farmers were given little time to react or organize before the crops they were cultivating were dug up and replaced with miles of concrete.

Encouraged by their projections of 65,000 jobs, U.S. officials were quick to approve funding for the park. But today, the park provides only 4,500 low-paid jobs and the farmers are left without land and livelihoods.

Sign the ActionAid petition and tell USAID that U.S. taxpayers’ money must not be used to force farmers off their land.

Four years from the day when farmers at Caracol had their land taken, they have yet to receive adequate compensation. Food insecurity in the Caracol area continues to rise due to a severe drought and reduced means of production, making the decision to cover fertile land with concrete even more controversial.

Clinic Antoine Iréné, one of the farmers who lost his land to the Caracol Industrial Park said: "The land at Caracol was used for food production all over the North East – plantain and other food. They’ve taken these lands and put concrete on them. The industrial park is the biggest injustice done to the North East because they could have chosen other, less productive places."

Please sign the ActionAid petition today, and tell USAID that the projects it supports must not force poor farmers off their land.

Photo of Marie Marthe Rocksaint by Marilia Leti/ActionAid -- Marie is a smallholder farmer and mother of two, who was forced to leave her land when construction of the Caracol Industrial Park started. Hers was one of 366 families that lost their land when the industrial park was given the go-ahead.“I had farmed my land for 22 years, but was made to leave without any compensation. Afterwards, the government sent investigators who were asking for all kinds of information from us but they never told us how much compensation they were going to give us. There were no negotiations, we were told to accept the compensation that they were going to give us. We thought the park was going to benefit us. First they promised us land, then housing, then all we got was a small amount of compensation.”