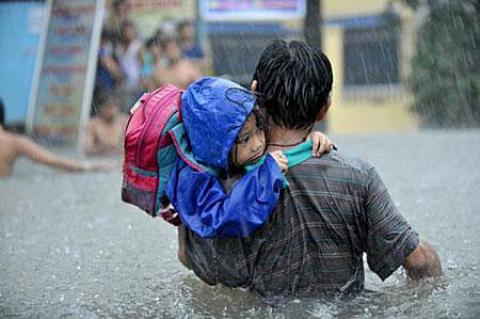 April is Earth month. It is a time to appreciate the diversity of plants, animals, and human communities around the world, which Pope Francis and the Bible call us to care for. But both people and the natural world face the threat of climate change.

Nearly a year and a half ago, Super Typhoon Haiyan hit the Philippines. This big storm forced 30,000 people, including children, from their homes and jobs, and nearly 8,000 people died. It cost $13 billion to the Filipino economy. Today, many children and families affected by the typhoon are still trying to find homes, schools, and work.

Last November, the United States and other wealthy countries announced the Green Climate Fund to make sure that communities most impacted by climate change will be able to pay for ways to slow its effects. The president asked Congress to include $3 billion over the next three years towards the fund. This is a drop in the bucket of what the entire U.S. budget is or what is really needed, but it can make a huge difference in getting other countries to pitch in.

Write your member of Congress today and let him/her know that climate change is important to you and that they should contribute to the Green Climate Fund.