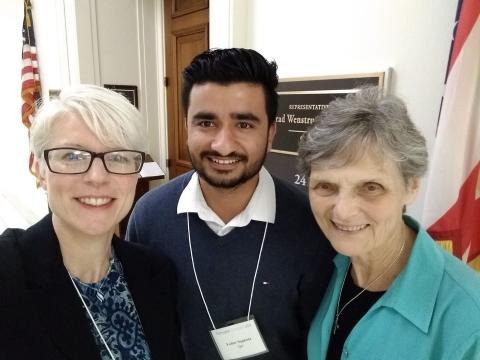 In recent days, Trump administration officials have proposed resettling no refugees – zero – in the United States in Fiscal Year 2020.

Such a cruel, unconscionable move would devastate thousands of qualified individuals and families who had been waiting for their chance to start new, safe lives. "Zeroing out" the program would end the U.S. refugee resettlement program entirely and violate our religious and moral values as well as international treaties.

Over the past two years, the Trump administration has cut the refugee resettlement program by an alarming 75 percent, setting the refugee admissions goal for 2019 at 30,000 – the lowest in U.S. history. The average annual goal since the creation of the program has been 95,000.

Photo: Susan Gunn of the Maryknoll Office for Global Concerns, Yadav Sapkota, a refugee from Nepal, and Sr. Jacquelyn Gusdane, SND, lobbied members of Congress to ask for critical support for the U.S. refugee resettlement program on May 9, 2019.

If anti-refugee voices in the White House get their way, ZERO refugees will be resettled in the United States in Fiscal Year 2020. Read statements by faith leaders in the Interfaith Immigration Coalition regarding this dire threat to the lives and safety of thousands of refugee families.

Please click HERE now to send a message to your Senators urging them to support a bipartisan letter (below), led by Senator Lankford (R-OK) and Senator Coons (D-DE), to the administration expressing sincere concerns over these reports. The deadline for signing the letter is tomorrow, Wednesday July 31, so please contact your senators today.

It is especially important to contact Republican senators urging them to support the letter. In particular, if you are represented by Senators Romney (UT), Crapo (ID), Collins (ME), Scott (FL), Gardner (CO), Young (IN), Ernst (IA), or Alexander (TN), please contact the Senator today.

The text of the letter from Senators to Administration officials is as follows:

Since its inception, the U.S. Refugee Admissions Program (USRAP) has resettled more than 3 million refugees to American communities in all 50 states. These refugees are part of a diverse American culture and flourishing economy.

While some Members of Congress have already expressed their displeasure with the FY2019 resettlement cap, and the lower-than-normal admittance numbers for FY2017 and FY2018, eliminating refugee admittance altogether is even more alarming. At a time when we are facing the “highest levels of displacement on record,” according to the United Nations Refugee Agency, we urge you to increase the refugee resettlement cap and to admit as many refugees as possible within that cap. America has a responsibility to promote compassion and democracy around the world through assistance to vulnerable and displaced people.

As you know, individuals fleeing their countries because of persecution or a well-founded fear of persecution on account of race, religion, nationality, membership in a particular social group, or political opinion qualify for refugee status. All refugees go through a legal process and are some of the most well-vetted travelers in the world. USRAP screening includes both biometric and biographic checks, which occur at multiple stages throughout the process, including immediately after the preliminary Resettlement Support Center interview, before a refugee’s departure to the United States, and on arrival in the U.S. at a port of entry. Resources have already been devoted to vetting refugees, some of whom have been awaiting placement for months. The latest pipeline report shows nearly 9,000 refugees are at the “Ready For Departure” stage in the screening process, and another 30,000 individuals have completed their U.S. Citizenship and Immigration Services (USCIS) interview. Even if no other refugee started to go through the screening process, there are already enough people in line to max out this year’s cap and welcome additional refugees in FY2020.

While we share the concern about the humanitarian crisis at the Southern Border, we disagree that eliminating refugee admittance would somehow alleviate the flow of individuals without proper documentation crossing between ports of entry. On the contrary, the United States has the ability to use refugee admittance to process individuals and families from Northern Triangle countries, which could allow for a decrease in asylum-seekers, especially those with children, at the border. It is inconsistent to maintain policies that promote in-country asylum and simultaneously eliminate the legal refugee process.

The USRAP program is a critical pillar of our national security and foreign policy, and enables the United States to fulfill key international commitments. Resettlement eases the burden on countries in conflict zones, which in turn increases global security and reduces the risk of refugees spending long periods of time in situations of vulnerability. Resettlement also contributes significantly to the United States’ identity as a humanitarian actor in the international community, bolstering our negotiating capacities, increasing our soft power, and demonstrating the United States’ continued commitment to human rights.

We were especially surprised to hear reports of the elimination or severe decrease in proposed refugee resettlement on the heels of the State Department’s Second Ministerial for International Religious Freedom, where survivors of severe persecution came to the United States to share testimonies of unimaginable human rights atrocities. America has an obvious interest in demonstrating and promoting freedom of religion to the world, including accepting refugees who flee persecution because of their faith. In fact, the administration acknowledges the partnership between refugee admission and protection of inherent human rights in both the 2018 Report on International Religious Freedom and the 2018 Country Reports on Human Rights Practices.

As we approach the 40th anniversary of the passing of the Refugee Act (Public Law 96-212), the benefits of resettling refugees remain clear and significant. Refugee populations significantly benefit local and national economies. Economists have found that refugees ultimately contribute billions more in taxes than they receive in benefits, and that refugees are more likely to start their own businesses and create jobs. In 2015 alone, more than 180,000 refugee-owned enterprises generated $4.6 billion in business income, more than the United States’ annual budget for refugee resettlement.

At a time when global leadership is needed more than ever to solve the complex refugee problem — both at home and abroad — the United States is well-positioned to continue its long legacy as a protector of human rights. Refugee resettlement combines the compassion of America with an important tool necessary to pursue foreign policy objectives. The United States will continue to benefit from the talent, drive, and ambition of resettled refugees who seek freedom, and the refugee resettlement determination for FY2020 should reflect those goals.

Thank you for your attention to this matter, and we look forward to your timely response.