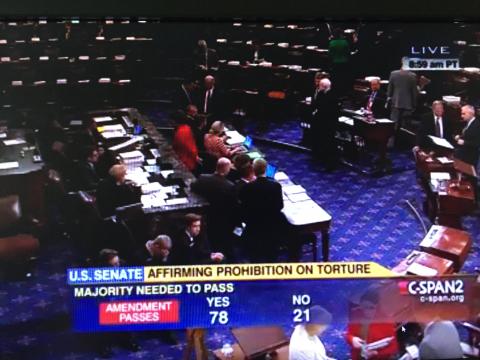 The following alert is posted by our colleagues at the National Religious Campaign Against Torture (NRCAT).

On June 16, 2015, in a bipartisan 78-21 vote, the U.S. Senate adopts amendment that would put a permanent end to CIA torture. Rev. Ron Stief, executive director of the National Religious Campaign Against Torture, after the vote: "For people of faith this vote expresses a widely-held moral principle that torture is always wrong. The faith community stood united behind the McCain-Feinstein amendment because torture is universally condemned by all religions. Ending torture isn't about politics, it's about who we are as a nation."

The McCain-Feinstein amendment would require the CIA to follow the Army Field Manual when interrogating prisoners and it would allow the International Committee of the Red Cross access to all detainees. Both of these requirements are already current practice as enacted by President Obama’s 2009 Executive Order, but without legislation that could change at any time. The McCain-Feinstein amendment would permanently prevent the CIA from restarting its torture program.

See how your senators voted on the amendment HERE.

You can reach your senators by dialing the Capitol switchboard at 202-224-3121. Please call and thank your senator if they voted for the amendment.

Thank you to everyone who called Congress to ask them to put and end to torture!