Loving our neighbors and enemies in a time of global uncertainty 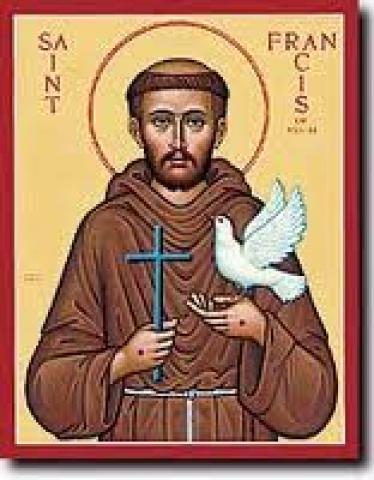 The following “prayer-study-action” reflection – focused on the upcoming election in the United States - is from our colleagues at Pax Christi USA.

Pray: Let the weapons fall from your hands

On this October 4, the Feast of St. Francis of Assisi, we recall the passionate plea of Paul VI in 1965 to the United Nations General Assembly when he called for war to be abolished once and forever:

If you want to be brothers [and sisters], let the weapons fall from your hands.  You cannot love with weapons in your hands. . . .  It suffices to remember that the blood of millions of men and women, numberless and unheard of sufferings, useless slaughter and frightful ruin . . . unite you with an oath which must change the future history of the world:  No more war, war never again!  Peace, it is peace which must guide the destinies of peoples and of all humankind.

Violence in all of its forms is sinful because it destroys human dignity and the common good. When violence becomes institutionalized--as poverty, war or racism--it becomes a form of idolatry, denying the sovereignty of God and the redeeming power of Jesus Christ's love.

Our prayerful reflection on the challenge of peace begins with our own encounter with the Crucified and Risen Christ. It is our encounter with the Crucified Jesus that shapes our understanding of peace. It is our experience of the Risen Christ in our families and communities that gives expression to our faith. That faith then impels us to look at the world and to examine the obstacles to peace.

What lessons can we learn from the past? What wisdom may we draw from our faith?

1. Fifty years ago, Pope John XXIII, in his 1963 encyclical letter Pacem in Terris, made an impassioned plea to the nations of the world for an end to the arms race and a ban on nuclear weapons:

We are deeply distressed to see the enormous stocks of armaments that have been, and continue to be, manufactured in the economically more developed countries. . . . The people of these countries are saddled with a great burden, while other countries lack the help they need for their economic and social development. . . . Justice, right reason, and the recognition of man's dignity cry out insistently for a cessation to the arms race. . . . Nuclear weapons must be banned.

Today there are more than 20,000 nuclear weapons in the world. More than half the world lives in a nuclear-armed country. In a two-part series, the Washington Post (Sept. 15-16, 2012) reports that the U.S. nuclear arsenal is set to undergo the costliest overhaul in its history, even as the military faces spending cuts to its conventional arms programs at a time of fiscal crisis. It is estimated that it will take $352 billion over the coming decade to upgrade and maintain 5,113 warheads, replace old delivery systems, and renovate the aging facilities where nuclear work is performed.

How can the U.S. be committed to eliminating nuclear weapons-as urged by our popes and bishops and as legally required under the Non-Proliferation Treaty when it is investing so heavily in upgrading its nuclear arsenal?

2. John Paul II's condemnation of war reached its strongest expression on January 1, 2000, the first day of the new century, when he spoke eloquently of the challenge of peace in his World Day of Peace message:

In the century we are leaving behind, humanity has been sorely tried by an endless and horrifying sequence of wars, conflicts, genocides and 'ethnic cleansings' which have caused unspeakable suffering, millions and millions of victims, families and countries destroyed, an ocean of refugees, misery, hunger, disease, underdevelopment and the loss of immense resources. . . . The twentieth century bequeaths to us above all else a warning: wars are often the cause of further wars because they fuel deep hatreds, create situations of injustice and trample upon people's dignity and rights. . . . War is a defeat for humanity. Only in peace and through peace can respect for human dignity and its inalienable rights be guaranteed.

Today the storm clouds of another war gather on the horizon, as talk of a military strike against Iran threatens to escalate into a major Middle East war. President Barack Obama has said that "all options are on the table." Republican nominee Mitt Romney appears even more committed to a military strike against Iran. Israeli Prime Minister Benjamin Netanyahu speaks of drawing a "red line" that would trigger a military response. Now more than ever, a diplomatic and peaceful solution to the crisis is needed.

After a decade of war in Afghanistan and Iraq, can any rational person think the U.S. and the world can afford a war against Iran?

3. On the twentieth anniversary of the U.S. Bishops' Peace Pastoral, Pax Christi USA initiated a "People's Peace Initiative," inviting Pax Christi members from local groups around the country and members of national Catholic organizations representing racially diverse groups to comment  on what violence and peacemaking look like from their perspective. The following four conclusions were part of the summary:

We believe it is essential for us, as Church, to elevate a clear moral voice to call for an end to all war as a means to resolving conflict. War truly is a defeat for humanity. We must lead a global movement to abolish war, just as those of a previous generation led the movement to abolish slavery. We must promote peacemaking, peace-building, and peacekeeping alternatives to establish justice and the conditions for enduring peace.

We recognize that the Church is in a unique position to lift its moral voice to call for a bold restructuring of an economic system that puts profits over people and to challenge the scandalous military spending in the face of massive human need. We also believe that given global warming and our nation's over-reliance on non-renewable energy sources, care for creation and global restoration are essential elements of our work for peace.

We know that to end war and poverty, and to achieve peace and ensure justice, we must work untiringly to end the violence of racism in all of its forms, from individual prejudice, to institutional racism and systemic racial oppression. Together, we must cross racial divides to cultivate solidarity, strong partnerships, and an understanding of each other and ourselves.

Finally, we are committed to building the foundation of the beloved community. We affirm that we have heard the cries of our people, whose suffering under the many guises of violence has pierced our hearts and whose aspirations have filled us with hope. With them and with people of faith throughout the world, we seek a world at peace, where the dignity of each person, racial equality, social and economic justice, and the integrity of the whole creation form the heart of our peacemaking efforts.

Consider the following with respect to your participation in this year's elections for president, senator, representative, and state or local government officials:

1. Do you face a situation in one or more of these contests where the choices are so morally objectionable that you should "take the extraordinary step of not voting for any candidate," in the words of the bishops? Even if you find the policies of both major-party candidates morally objectionable, are one candidate's policies worse on balance than the other's? If so, which candidate would benefit more from your abstaining from voting, and are you willing to accept that consequence?

3. Do you believe the political system at all levels is so corrupt and the policies of the major parties (or all parties) so pernicious that it's better to have nothing to do with elections? Even if you believe one party's policies are worse overall than the other's, are you willing to have that party succeed on the theory that things will have to get worse before they can get better--thinking, e.g., that the winners will overreach and provoke a backlash in two or four years? If so, is the prospect of a hopeful turnaround sufficiently realistic to justify the hardship that will be endured in the meantime? How does this approach square with Catholic social teaching?

4. Is vote swapping an option that would allow you to vote with a clearer conscience? For example, in 2000, some Nader supporters in swing states agreed to vote for Al Gore in return for pledges from Gore supporters in solid "red" or "blue" states to vote for Nader. The idea was that Nader would thereby get enough votes to "send a signal" to the Democrats, without the voters unintentionally supporting George Bush by taking votes away from Gore in swing states. Assuming vote swapping is legal in your state and you favor a third-party candidate, is it worth talking to people you know in other states or districts to arrange to swap votes?