Korea: Stand in solidarity with the people of Jeju Island 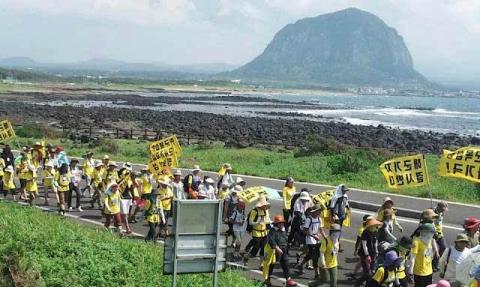 The following petition was organized by our colleagues at the Columban Center for Advocacy and Outreach.

July 27, 2013 marked the 60th anniversary of the Korean Armistice. We remain deeply worried about the negative social and environmental impacts that will affect the Gangjeong community living on Jeju Island. This military expansion threatens the way of life of our brothers and sisters and the surrounding fragile coral ecosystem that is recognized as a UN World Heritage site.

Peace activists, environmentalists, and people of faith are deeply committed to peace on the Korean peninsula and stand up against efforts to increase a military presence on Jeju Island. As Pope Francis addressed during his first Easter mass celebration, we must maintain peace between all people of the world as we are “guardians of creation.” He emphasized a need for further peace in Asia, especially on the Korean Peninsula, voicing, “may disagreements be overcome and a renewed spirit of reconciliation grow.”

Please sign this solidarity letter with the Gangjeong community on Jeju Island below as an individual or organization.

To the people of Jeju Island,

We, the undersigned faith-based, peace, environmental, and other civil society members and organizations, are concerned for you, our brothers and sisters, as the proposed military base on Jeju Island continues to threaten the lives and environment of your people. We offer solidarity as you fight for the right to protect the village of Gangjeong from expanded militarization.

We recognize the fragileness of the Earth, and particularly the unique habitat on Jeju Island. As a United Nations World Heritage Site, Jeju Island is known for its unique marine life and biodiversity. We worry that increased militarization in the region will result in oil and waste contamination to the surrounding waters and land. We know the construction will destroy the coral reef habitat in the area that many species depend on. We will advocate for the protection of this precious ecosystem. We feel pain for your families because we know that the gifts of water, air, and soil that sustain many lives and are critical to Jeju Island culture may be destroyed as a result of the base construction and the military operations that will follow.

We extend our hearts for the lives lost in the 1948 massacre on Jeju Island and will not stand to see a military harm its own people a second time. We take to heart the words of Bishop Kang Woo Il of the Jeju Island Diocese, “A military base on this island – with all of the latest weapons collected in one place, including the Aegis and aircraft carriers, creating a great concentration of military power – it simply does not make sense to be on Jeju Island ... We also see this as a peace issue for the whole nation, and not even just our country, but also an issue for China, Japan and Korea – countries that have not yet been able to overcome the conflicts between them ... We believe that this is not healthy for the peace of Korea, for Northeast Asia, and for the whole world.”

The 60th anniversary of the armistice reminds us that we are called as humanity to be peacemakers and protect the way of life and environment of those affected by expanded militarization and long-standing international dispute. We know from past experience that the arrival of military personnel may harm women and the overall public health of those residing in your community. Utilized by South Korean and United States militaries, this base will pose a threat to the current security of the Gangjeong Village and the entirety of Jeju Island. We stand with you, planting our feet firmly, in hopes of halting the transformation of your beautiful home and environment into an international military target.

Please be assured that we will continue standing in solidarity with you in your struggle to maintain your way of life, livelihoods, and fragile island ecosystem in the face of the harmful effects of militarization.

Photo from the Save Jeju Now Coalition