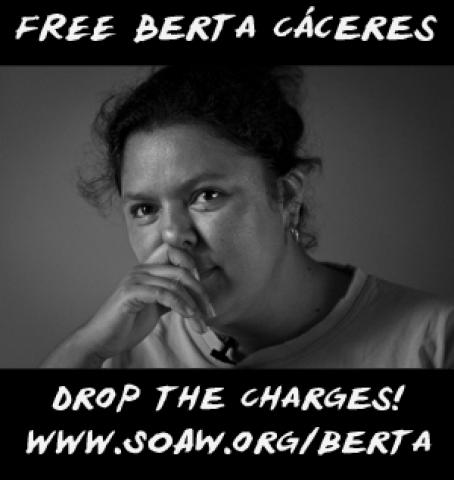 When Honduran President Manuel Zelaya was overthrown by a military coup in 2009, a great segment of civil society organized in resistance to the illegitimate government that took his place. However, in the face of widespread nonviolent protest and resistance that seeks a return to functioning democracy and the protection of the environment and Honduras's natural resources, the Honduran government has embarked on a course of militarization and the criminalization of social protest.

In September 2013, a Honduran court dictated that widely recognized social movement leader Berta Cáceres, the general coordinator of the Consejo Cívico de Organizaciones Indígenas Populares – COPINH (Civic Council of Popular Indigenous Organisations), be jailed while awaiting trial in a political case aimed at destroying resistance to a mega-project being imposed on the indigenous Lenca communities of Rio Blanco through military force. Two additional COPINH leaders, Tomas Gomez and Aureliano Molina, are also facing charges. This is part of a growing trend of criminalizing social movement leaders across the country, just two months before Honduras' elections.

Please take action with School of the Americas Watch, calling for freedom for Berta Cáceres, an end to the criminalization of her organization COPINH (Consejo Cívico de Organizaciones Indígenas Populares – Civic Council of Popular Indigenous Organizations), and other social movements, and withdrawal of the military and police from the indigenous Lenca communities of Rio Blanco.

From the International Labor Rights Forum (ILRF): Honduran trade union leader Victor Crespo has been forced to flee Honduras after armed assailants tried to batter their way into his home. The attack came after two months of anonymous death threats that began when Crespo, general secretary of the Sindicato Gremial de Trabajadores del Muelle (SGTM), requested a collective bargaining agreement with the new operators of Puerto Cortes, ICTSI (International Container Terminal Services, Inc). Worker rights activists around the world, led in a campaign by the International Transport Workers’ Federation (ITF), are calling on the Honduran Government to secure Crespo's safety with police protection and to give assurances about workers being able to exercise their legal right to collectively bargain.

Take action using this link on the ILRF website.