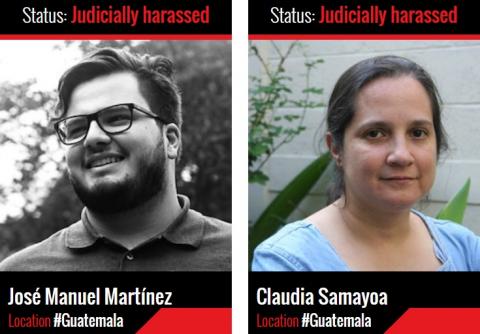 Claudia Samayoa and Jose Martinez are facing false accusations of criminal behavior by the president of the country's Supreme Court.

Claudia Samayoa is President of the Unit for the Protection of Human Rights Defenders in Guatemala (UDEFEGUA) and member of the local chapter of the Maryknoll Affiliates in Guatemala.

José Martínez is a member of the Justicia Ya collective.

Ms. Samayoa told the Maryknoll Affiliates that she believes the charges by the Supreme Court are a direct response to the two human rights defenders' legal actions in defense of the Constitutional Court after it ruled against President Jimmy Morales’ decision to shut down the U.N.-sponsored International Commission Against Impunity in Guatemala (CICIG), which has been investigating crime and corruption since 2007. Morales accused CICIG of violating Guatemala's sovereignty, a claim U.N. Secretary-General Antonio Guterres rejected. Since the Constitutional Court overruled Morales's decision, the CICIG has been able to resume its work. The CICIG has been instrumental in investigations leading to trials and convictions against human rights violators in the Civil War as high up as former president General Rios Montt.

Now, the President of the Guatemalan Supreme Court is accusing the two human rights defenders of illegally obtaining a court document and influence peddling. This is the latest move in a retreat from the rule of law and transparency in Guatemala. It is yet another attempt to silence individuals and institutions that seek to address corruption and impunity.

The Maryknoll Office for Global Concerns rejects the criminalization of Claudia Samayoa and Jose Martínez for defending the constitutional rights of the people of Guatemala.

Organizations: Please use this link to sign on to a letter to Secretary of State Mike Pompeo by April 4.

Individuals: Copy and paste the following letter to Secretary Pompeo into the online form on the State Department website at https://register.state.gov/contactus/contactusform

SUBJECT:  Please publicly raise concerns with the Republic of Guatemala over the criminalization of human rights defenders Claudia Samayoa and José Martínez

I write to you as a citizen concerned about increasing patterns of persecution and violence against human rights defenders in Guatemala. According to data compiled by the Unit for the Protection of Human Rights Defenders in Guatemala (UDEFEGUA), in 2018 there were 391 attacks against human rights defenders, including 26 killings and 147 cases of criminalization. Most recently, two human rights defendes – Claudia Samayoa, President of the Unit for the Protection of Human Rights Defenders in Guatemala (UDEFEGUA) and José Martínez, a member of the Justicia Ya collective, were named in a criminal complaint made by the President of the Supreme Court of Justice (SCJ), Nester Mauricio Vásquez Pimentel, in  retaliation for a complaint  Ms. Samayoa and Mr. Martinez filed on January 17, in which they requested that immunity be lifted for all eleven judges on the Supreme Court due to the court's decision on January 9 to allow hearings to be held on the possibility of impeaching three members of the Constitutional Court who voted against President Jimmy Morales in his legal struggle against the International Commission Against Impunity, a UN-sponsored anti-corruption commission known as CICIG.

Please speak out in defense of fundamental freedoms and human rights and to call on the Guatemalan government to:

This moment of grave threat to the human rights and lives of Claudia Samayoa and José Martínez presents a critical opportunity to clarify that the U.S. government stands in defense of human rights, transparency, and democracy. Thank you for your attention to this grave concern.