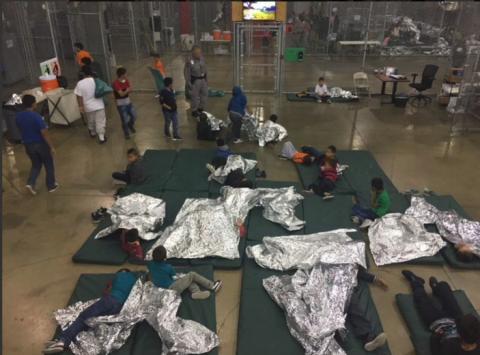 Grassroots organizers, community activists and ordinary people around the country are putting love and nonviolence into action in response to the U.S. government’s militaristic approach to the humanitarian crisis on the U.S.-Mexico border, where record-numbers of migrant families and children have requested asylum.

Last fall, Maryknoll Sisters Lelia Mattingly and Margaret Sierra joined vigils at the Tornillo immigrant child detention center located about an hour from their home in El Paso, Texas, lending their voices to the call to close the facility that had grown into a tent city imprisoning thousands of immigrant children indefinitely. At the same time, the Maryknoll Office for Global Concerns in Washington, D.C. joined dozens of faith-based and community organizations in asking Congress to take action to end detention of migrant children.

“This is something we never thought would happen,” Sister Mattingly said in an email after attending demonstrations at Tornillo. “Many of these kids have families in the U.S. and could be reunited, but it seems the whole horrible broken immigration system keeps coming up with heart-breaking answers.”

After six months of persistent grassroots organizing and nonviolent protest, the detention facility in Tornillo was shut down.

Now, immigrant children are being held in a similar center in Homestead, Florida. For an average of two months at a time, unaccompanied immigrant children are detained at the Homestead facility, run by a for-profit company, with little access to the outside world, at a cost of $775 per day, per child. Other, more humane options are available to provide for these children.

Take action to shut down the Homestead facility

Sign the petition. Click here to sign. Campaign organizers are hoping to bring 100,000 signatures to the US Department of Health and Human Services demanding the closure of Homestead.

Pray for immigrant children. You may want to use this prayer provided by Education for Justice.

Photo: Photo provided by Custom and Border Protection to reporter on tour of detention facility in McAllen, Texas, June 17, 2018. Reporters were not allowed to take their own photos.