DRC: M23 withdraws but remains nearby 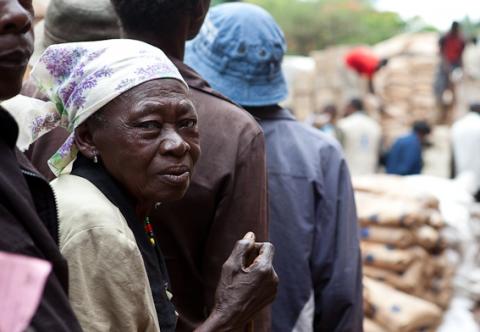 UPDATE: "After controlling the city for two weeks, M23 fighters withdrew from Goma on Dec. 1 in anticipation of direct negotiations with Democratic Republic of Congo’s President Joseph Kabila. The rebels have remained in a ring around the city, within a 20-kilometer (12-mile) neutral zone they had agreed to leave, according to Brigadier-General Bansi Ponnappa, the commander of the UN’s North Kivu brigade." -- Rwandans aided Congo rebel attack on Goma, UN is told, Flavia Krause-Jackson, Bloomberg News, December 4, 2012.

The following alert is from Friends of the Congo, www.friendsofthecongo.org.

November 26 -- The crisis in the east of the Democratic Republic of the Congo (DRC) has recently escalated to the point where Goma, a major city of an estimated one million inhabitants, has been taken by the Rwandan-backed M23 proxy militia. Hundreds of thousands of Congolese in the North Kivu province have been rendered homeless and displaced. Oxfam reports that "Congolese are suffering violent abuse on a massive scale - including rape, kidnap and murder."

The response from the international community has not been commensurate with the dire conditions faced by the Congolese people. In spite of several United Nations (UN) studies that document the source of the instability and the role that Congo's neighbor Rwanda has played in arming, training and financing the destructive M23 proxy militia inside the Congo, the response from the international community has been tepid at best and equivocal at worst.

Immediate and robust diplomatic action is required at the international level particularly at the UN and specifically by the United States, arguably the strongest supporter of Rwanda in the global community. The recently published UN Group of Experts report documents clearly the role that Rwanda and Uganda are playing in directing the M23 proxy militia. British Foreign Secretary William Hague and International Development Secretary Justine Greening said, "We judge the overall body of evidence of Rwandan involvement with M23 in the DRC to be credible and compelling."

In light of the UN report, the UN Security Council's own resolution calls for decisive action. Section 8 of Resolution 2076: "Expresses its intention to consider additional targeted sanctions, in accordance with the criteria set out in resolution 1857 (2008), against the leadership of the M23 and [those providing external support to the M23] and those acting in violation of the sanctions regime and the arms embargo, and calls on all Member States to submit, as a matter of urgency, listing proposals to the 1533 Committee.”

Send a tweet to U.S. Ambassador to the UN Susan Rice at @ambassadorrice or call the U.S. Mission to the UN at 212-415-4404 and demand that the U.S. take decisive action against Rwanda at the UN:
1. Rwanda should be explicitly named in resolutions calling for an end to the aggression against the Congolese people by the Rwanda-backed militia.
2. Sanctions should be imposed on high-level officials in the Rwandan government who are backing the M23 such as Minister of Defense James Kabarebe and Chief of Staff Charles Kayonga.
3. Rwanda should be sanctioned for violation of UN embargo on supplying weapons to armed militias in the DRC.

·         The Economist: Congo's eastern crisis: Fraying round the edges

Get the latest updates by following Friends of the Congo (FOTC) on Twitter @congofriends
Visit the FOTC resource center for latest news, analyses, reports, resolutions, videos, interviews, Q & A  about the current crisis and more action that you can take.
Support FOTC’s organizing efforts inside and outside the Congo.
email: info@friendsofthecongo.org
phone: 202-584-6512
http://www.friendsofthecongo.org