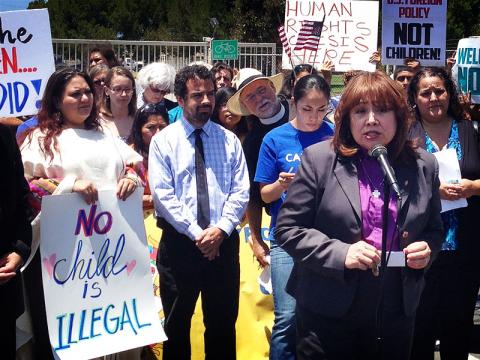 From our colleagues with the Interfaith Immigration Coalition:

As the U.S. government responds to the humanitarian crisis faced by unaccompanied children and families fleeing violence in El Salvador, Guatemala and Honduras, both President Obama and some members of Congress are proposing changes to the Trafficking Victims Protection Reauthorization Act (TVPRA). The TVPRA passed both chambers of Congress by unanimous consent and was signed into law by President Bush in 2008, in part to reduce the likelihood that the U.S. would deport children back into the hands of traffickers and other dangerous situations. Changes to the TVPRA would mean that children would not have a meaningful opportunity to have their story heard or apply for asylum, and would likely be deported to unsafe and potentially like threatening situations. Congress should not rescind this bipartisan law at precisely the time when more children are in need of these protections. The U.S. must show leadership by finding ways to reduce the violence these children face in their home countries, rather than immoral proposals to deport them more quickly.

This heartbreaking story, shared by a partner of a Jesuit social center in Honduras, is one of many that show why these children need access to protection: After “Leticia” was raped by over a dozen gang members, she and her family reported the crime to the police. They immediately began to receive death threats. In the absence of any protection, and likely complicity by police in the gang’s terror campaign, the local partner attempted to relocate Leticia to a women’s shelter. The shelter refused to take the case because of fear that they would not be able to protect either Leticia or their other beneficiaries from the gang. In the end to protect Leticia from further harm, she had to be sent to another country.

Call 1-866-940-2439 to be connected with the offices of your representative and both of your senators.

You can also use this link to send a message.

You can also find their direct phone numbers at http://www.house.gov and www.senate.gov.

“I’m from [State, Congregation/Community] and as a person of faith, I strongly oppose any rollbacks to the Trafficking Victims Protection Act.

“Unaccompanied children fleeing violence should not be returned to unsafe situations. As your constituent, I expect you to stand firm against any proposal that would sacrifice a child’s safety for expediency. The U.S. must instead find ways to reduce the violence these children face in their home countries, and ensure that children who arrive to the U.S. have access to the legal counsel and services they need.”

Use this link to send a message to Congress, urging both protection of the TVPA and approval of the requested increase in funding for the Office of Refugee Resettlement.

Keep up the pressure on social media!

Find your representative and senators’ Twitter handles here and urge them to oppose proposals that would hurt unaccompanied children.

Ex: . @SpeakerBoehner As a person of faith I urge you to oppose changes to the TVPRA that would return children to unsafe situations #iamsolo #theyarechildren #uacs