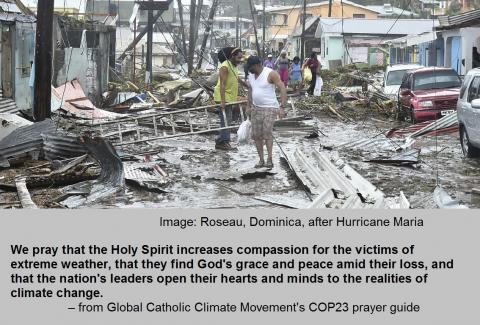 In a surprise move, the Trump Administration approved the release of the fourth edition of the National Climate Assessment on November 3. This exhaustive report by 13 federal agencies details the effects rising global temperatures are already having across the United States. It also clearly states that humans have directly contributed to the sharp rise in global temperatures over the past century.

Not only do we know rising global temperatures are here, we know that communities living in poverty are most vulnerable to the effects of climate change and least equipped to adapt.

Last year, Pope Francis said, “Never before has there been such a clear need for science to be at the service of a new global ecological equilibrium.” … “I am pleased that you perceive so deeply the solidarity which joins you to the humanity of both today and tomorrow, in a sign of great care for mother earth.”

Right now, world leaders are meeting in Bonn, Germany, for the latest UN climate talks. The government of Fiji, one of the most climate vulnerable countries in the world, is presiding over the talks. Back in Washington, Congress is still hammering out the details of a budget deal.

The Senate has passed a spending bill that includes $10 million to help fund the UN’s climate change body that oversees the Paris climate agreement, the same group that is hosting the climate talks in Bonn, despite President Donald Trump’s decision to leave the Paris agreement.

The House bill does not include this funding. We need to encourage the Senate to stand strong.

Please ask your Senators to protect climate solutions in the budget.

In addition to taking action, please join us in prayer each day for the UN climate meetings using this prayer guide from the Global Catholic Climate Movement.