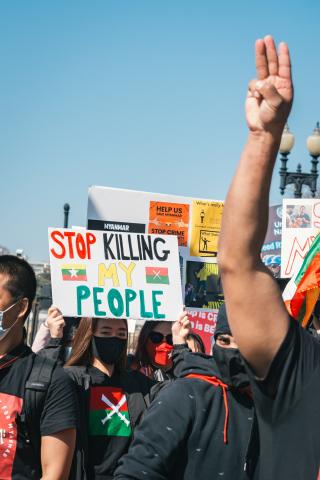 Take action: Urge Congress to stop the violence in Myanmar by imposing targeted sanctions on the military regime.

It has been one year since the Myanmar military seized power in a coup d'etat on February 1, 2021, imprisoning elected representatives and prominent pro-democracy and human rights advocates. Since then, the army has killed more than one thousand protesters and injured and imprisoned thousands more, including Catholic sisters and other religious leaders.

After careful research and consultation with partners in Myanmar, faith-based and human rights organizations are confident the sanctions established in the BURMA Act would not have a significant negative impact on the civilian population and that they are necessary to effectively pressure the junta to cease its violent repression of democracy activists and ethnic and religious minorities. Friends of faith groups on the ground write of continued arrests, killings, and displacement: “Unless the sources of the junta’s financial resources are stopped or depleted, violence will continue.”

On this grim anniversary, scroll down to take action by asking Congress to support the BURMA Act of 2021.