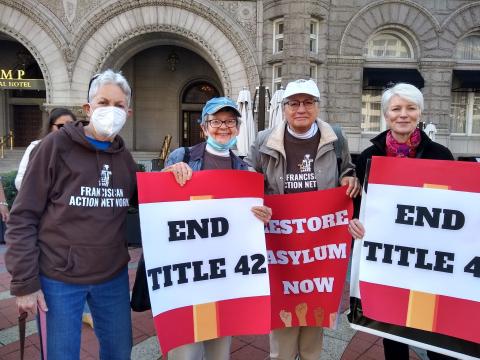 Last month, the CDC and the Biden administration announced that they would end rapid expulsions of asylum seekers under the Title 42 health policy on May 23. After two years of advocacy against Title 42 expulsions, we rejoiced at this news. Now, a group of lawmakers is trying to override this decision by passing legislation to expand and strengthen the Title 42 policy. Congress could vote on this legislation as early as this week.

A group of over 1000 Catholic sisters, including Maryknoll sisters, wrote a letter urging the government to follow through with ending Title 42 on May 23. Now you can raise your voice too: Tell Congress to support ending Title 42 and restoring asylum.

First enacted under the Trump administration and continued under President Biden, the pandemic-era Title 42 health policy has allowed border authorities to expel asylum seekers immediately, denying them their legal right to seek asylum. Public health experts have spoken out against this health policy as outdated and ineffective, and human rights groups have attested to the harm the policy has caused for migrants, including through documenting nearly 10,000 cases of violence against migrants expelled under Title 42.

If Title 42 is allowed to continue, the asylum system will continue to be severely weakened. As people of faith, we are called to support protections for the persecuted and oppressed.

Now is the time to tell Congress to support the Biden administration in ending Title 42 and restoring the asylum system.