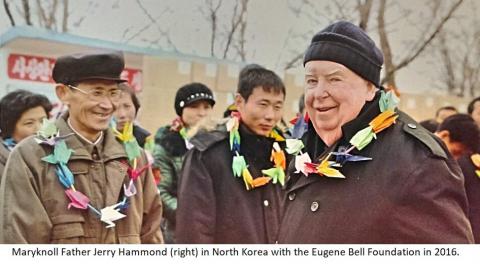 The Maryknoll office for Global Concerns issued the following statement on June 15, 2018.

We congratulate U.S. President Donald J. Trump and North Korean leader Kim Jong-un for their Singapore Summit on June 12. Though vague on many points, the Maryknoll Office for Global Concerns welcomes their joint statement in which they commit to pursue peaceful U.S.-North Korean relations and the “complete denuclearization of the Korean peninsula.”

We celebrate this new vision for peace on the Korean Peninsula.

Even without substantive commitments, their joint statement is a tremendous improvement over the mutual brinkmanship and all-too-real risk of war that escalated in 2017. The commitment by both leaders to dialogue and to a peace process is a relief not only for the millions of people on the Korean Peninsula who have lived within range of nuclear warheads for far too long, but also for all humankind who wish to live and thrive in a world free of the poison and destruction that nuclear weapons bring.

We also applaud President Trump, Chairman Kim, and South Korean President Moon Jae-in for taking the first steps towards negotiating a peace agreement. Reaching an agreement, implementing it, and ensuring that it lasts, however, requires further concerted efforts on all sides to move North Korea out of its isolation and into the international community and to ensure accountability for North Korea’s well-documented human rights violations and for the United States’ commitment to denuclearize its presence on the peninsula.

We offer Maryknoll Father Jerry Hammond as an example of the culture of encounter which we hope and pray the United States, North Korea, and South Korea will embrace. Over the last 18 years, Father Hammond has built bridges of friendship and mutual understanding with the people of North Korea through his many visits with patients at multidrug-resistant tuberculosis treatment centers in the isolated country. Father Hammond’s lived experience in North Korea demonstrates that, when we free our minds and hearts of fear and resentment and value dialogue, life and human dignity, deep wounds of the past will begin to heal and a vision of a shared peaceful future will come into focus.