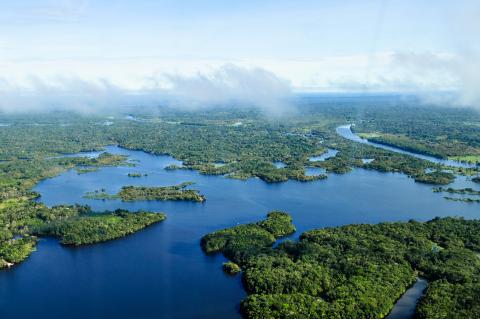 The Maryknoll Office for Global Concerns joined other organizations in issuing the following statement for International Biodiversity Day, May 22, calling on investors to end speculation with farmland and forests that will destroy biodiversity.

To mark this year’s International Biodiversity Day, May 22, we call upon participants in investment funds, pension funds and retirement plans to demand an end to speculation with farmland that destroys biodiversity, makes food systems more vulnerable to climate change and natural disasters, and creates the conditions for pandemic disease.

The following cases reveal the destruction of local farms and forests in the United States and in Brazil by financial corporations that manage funds of universities, governments and other employers. These land deals stimulate the expansion of monocropping plantations, which is a major driver of biodiversity loss globally.

In the United States, the Teachers Insurance and Annuity Association of America (TIAA) has brought in money from U.S., Canadian, European and other state pension funds to acquire farmland with false promises of sustainable agricultural investment. Instead, most of these acquisitions are tracts of farmland dedicated to one or two row crops, mainly corn and soy farmed by tenant farm operators. With fleets of machinery, these operators apply chemicals to our watersheds to produce fuel to burn in transportation and to feed animals grown in massive confinement facilities to be shipped, slaughtered and disassembled in giant meatpacking plants.

In the northeast of Brazil, both TIAA and Harvard University have created opaque corporate structures to take control of large tracts of the Cerrado savanna, increasing deforestation and fires and depriving rural communities of the water and land they need to survive and thrive. The Brazilian Cerrado is the most biodiverse savanna in the world and is second only to the Amazon in biodiversity in the Western Hemisphere.

We believe that those investing on behalf of higher education have a particular role to play in protecting all life and securing a livable future. Instead, educational endowments and retirement funds are being used to promote a destructive agricultural system that destroys forests, bringing humans into increasing competition and contact with zoonotic viruses in wildlife. These land deals eliminate small family farms and local businesses, cause the closing of schools and health services, and displace rural communities, pushing them to urban areas.

Speculation with farmland is a main cause of destruction in fragile ecosystems. It promotes agricultural systems based on the extension of biologically identical monocrops patented by chemical companies. These companies’ products are used to greatly diminish the biodiversity of soils and fields, making small farms and local food systems more vulnerable to climate change and extreme weather and putting food security at risk. Large plantation crops are burned for fuel or used to feed factory-farmed animals that are bred to be nearly genetically identical. These animals are confined and slaughtered in conditions that are ideal for the evolution and spread of zoonotic diseases resulting in human pandemics like SARS, MERS, H1N1 and COVID-19.

We call on TIAA, Harvard University, and state and other pension funds to stop speculating with farmland and promoting the concentration of agribusiness, which is a main contributor to climate change and loss of biodiversity. Farmland and forests must be returned to community-based ownership and control. We need more investments that support rural communities, agroecology, and biodiverse family farms with decentralized, safer and more resilient farm-to-fork food systems. Rather than relying on vulnerable, long-distance supply chains, such local and regional food systems improve local economies and better provide for urban and rural populations.