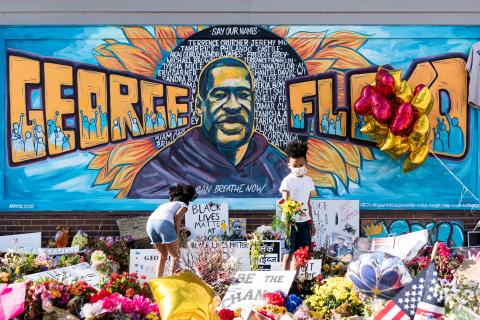 The Maryknoll Office for Global Concerns issued the following statement on April 21, 2021, following the conviction of former police officer Derek Chauvin for the murder of George Floyd.

Derek Chauvin has been found guilty on all three counts for the killing of George Floyd. Nothing can return George Floyd to his family and loved ones. But the guilty verdict marks a liminal moment in our nation’s long struggle to overcome racism.

Telling and affirming the truth is the first crucial step toward reconciliation and just peace. There are many more steps
to take, from further criminal justice system reforms to a wider national reckoning with our shared history of racist violence and injustice. But today, we give thanks for this vital turn toward justice.

Maryknoll Lay Missioners, Sisters, and Fathers and Brothers serving around the world recognize the powerful significance of this moment, not only for the United States, but for people everywhere. In Africa, Asia, Latin America, as well as at the frontlines of the civil rights movement in the United States, we see the legacy of colonialism and systemic racism in the continual brutalizing of Black and Brown people.

We have repeatedly identified impunity as a central pillar sustaining these systems of violence. When police who kill unarmed Black people in the United States are not held to account, it sends a dangerous message to violent actors abroad. Mr. Chauvin’s guilty verdict marks a critical step not only toward ending impunity in cases of police violence in the United States, but also toward restoring the credibility of the United States in the eyes of the world.

We call on U.S. leaders to build on this foundation by condemning racism and demanding accountability for perpetrators of violence wherever they occur. Both domestic and international policy must reflect the Gospel truth echoed by Pope Francis, that we are sisters and brothers all. There are no “throwaway people.” Black Lives Matter.

We commit to raising our voices and the voices of Black and Brown communities with whom Maryknoll missioners live and work as we advocate for such policies. In the streets over the last year, we have heard the refrain, “No justice, no peace.” We recommit ourselves to the pursuit of Gospel nonviolence, which understands peace as inseparable from justice, and true justice as the restorative, integral justice that allows and sustains peace.

As our nation processes Derek Chauvin's guilty verdict, join us in praying the Litany for Those Who Aren't Ready for Healing by Rev. Dr. Yolanda Pierce, available on the Catholic Mobilizing Network website. "Let us not rush to the language of healing, before understanding the fullness of the inquiry and the depth of the wound." Amen.