Save the Dreamers, Justice for Immigrants 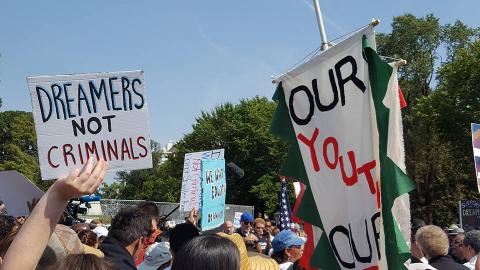 The Maryknoll Office for Global Concerns issued the following press statement on September 5, 2017.

On September 5, we stood outside of the White House with some of the young people who refer to themselves as ‘Dreamers’ as they cried when the news broke that President Donald Trump will repeal the Deferred Action for Childhood Arrivals (DACA) program. Immediately after, we marched with them to the Department of Justice, chanting "Undocumented, unafraid!"

The Maryknoll Office for Global Concerns shares the heartache of the approximately 800,000 young people in the DACA program, the Dreamers, who will soon find themselves without work permits, without protection from deportation, and trapped in the Kafkaesque bureaucracy of the U.S. immigration system.

“To end the DACA program is to deny the gifts and talents that these young people offer to our communities and to ignore yet again our responsibility for fixing our broken and cruel U.S. immigration system,” said Gerry Lee, director of the Maryknoll Office for Global Concerns.

We call on Congress to enact permanent and comprehensive immigration reform that is just and compassionate. Until then, these young people should not be subject to deportation and their families should not be torn apart. After nearly sixteen years of debate and inaction on this issue in Congress, we once again cry out “Justice for immigrants!”