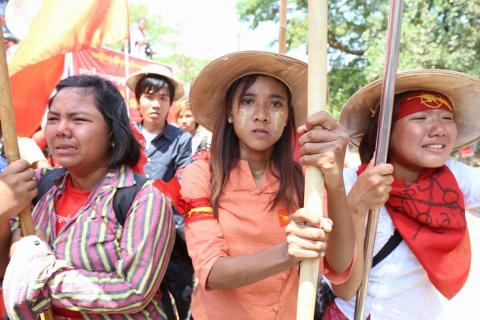 Eight national Catholic organizations sent a statement on March 17 to President Joe Biden and Congress, urging for stronger action to promote democracy in Myanmar after the violent military coup.

Read the press statement as a PDF

WASHINGTON, DC – Today, March 17, eight national Catholic organizations sent a statement to President Joe Biden and Congress, requesting that the United States respond to the continuing violence by the military in Myanmar by issuing targeted sanctions against businesses owned by the military and working with other countries to impose a global arms embargo. The Catholic groups see both actions as essential for strengthening the nonviolent resistance to the military coup and keeping hopes for peace and democracy in the long suffering country alive.

“Maryknoll missioners are blessed to have been welcomed by the good people of Myanmar for many years. Now we see images and hear testimony of peaceful demonstrators being detained, shot at and killed by the military in Myanmar. We must cry out with them and with Pope Francis, saying stop the violence! Cardinal Bo of Yangon has told us that the people fear the worst is at hand, a relapse into darker days of military rule. We want the people of Myanmar to know that we hear their cry and we stand in solidary with them. We ask President Biden and Congress to do everything they can to stop the violence and strengthen Myanmar’s fragile journey of democracy.”

“The National Advocacy Center of the Sisters of the Good Shepherd and the Congregation of Our Lady of Charity of the Good Shepherd, U.S. Provinces, stand with our Good Shepherd Sisters in Myanmar and all of the people demonstrating, praying and working for a return to democracy. We mourn the increasing numbers of lives lost and urgently call on the Biden administration to sanction and pressure the coup leaders and military to step aside.”

“We join our voices with Catholics throughout the world to express our solidarity with the people of Myanmar in their courageous nonviolent struggle for democracy and freedom. We call on the Biden administration and the U.S. Congress to take steps to ensure that the military in Myanmar end the violence and instead pursue a peaceful path to a democratic future through dialogue and respect for human rights.”