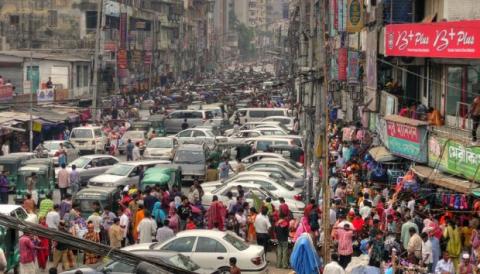 The Maryknoll Office for Global Concerns wrote a letter signed by 120 religious traditions and organizations across the United States – including the U.S. Conference of Catholic Bishops, Jewish Council for Public Affairs, the National Council of Churches, and the Evangelical Environmental Network – to the members of the U.S. Congress, in which we urge their support for the Green Climate Fund.

The letter asks Congress to appropriate $750 million for Green Climate Fund for fiscal year 2017 based on the administration’s request. Half of the Green Climate Fund is dedicated to the adaptation needs of nations and peoples vulnerable to the climate impacts. Additional priority is given to the least developed countries and Small Island Developing States. For example, one of the eight projects approved by the Green Climate Fund is in Bangladesh, a nation already impacted by sea level rise, to build shelters and other infrastructure to protect over 130,000 people from coastal flooding. Such projects build community stability to prevent dislocations and migrations that impact the economic and political security of all nations.

“Just as we are experiencing a shortage of water in the major cities [from weak and delayed monsoons], the big rivers – the Brahmaputra and Ganges – are flowing full speed from the melting snows in the Himalayas and gouging out great swaths of farm land, threatening a whole way of life for millions of people," said Maryknoll Sister Claudette LaVerdiere in Bangladesh. "Those who lose everything flock to [the capital city of] Dhaka to seek work. This city of approximately 16 million is already crowded beyond belief. There is truly no room to spare, and still they come.”

Gerry Lee, director of the Maryknoll Office for Global Concerns, said: “Maryknoll missioners, Catholic men and women who serve in Asia, Africa, and Latin America, see the impact of climate change on the lives of our sisters and brothers who are least able to respond to sea level rise and drought, from Tanzania to Bangladesh. Pope Francis recognizes that wealthy countries, like the United States, have a responsibility to developing countries to both prevent and respond to climate-related disasters. We urge Congress to support the $750 million budget request for the Green Climate Fund to both reduce greenhouse gas emissions and respond to the needs of the most vulnerable.”

For a list of quotes from religious leaders on the release of the letter, please click here.

Photo of a traffic jam in Dhaka, Bangladesh, by Flickr/Josieyshowaa, and licensed in the creative commons 2.0. Click here for more information on the issue of sea level rise in Bangladesh and what you can do to.
Attachment:

Faith letter to Congress in support of the Green Climate Fund