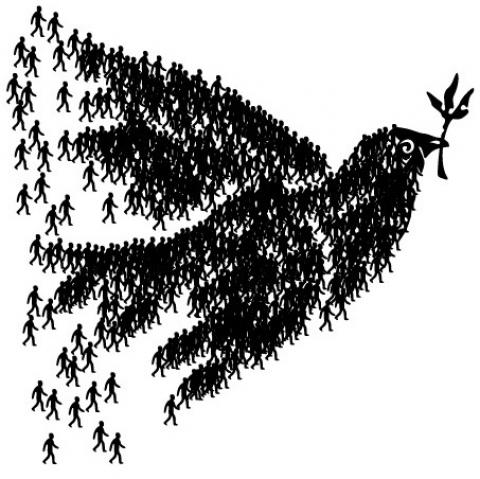 The Maryknoll Office for Global Concerns joined the Forum on the Arms Trade and many other organizations in issuing a joint statement on the Trump administration's new landmine policy.

In response to the January 31st announcement by the White House of the Department of Defense’s new landmine policy, we, the undersigned organizations, strongly condemn the Trump Administration’s decision to lift existing United States prohibitions against the use of landmines. We urge the White House and Department of Defense (DOD) to reconsider and take steps to join the 1997 Mine Ban Treaty. We urge Congress to take immediate measures to block the deployment of landmines and prohibit the development, production, or other acquisition of new antipersonnel landmines.

Landmines are inherently indiscriminate weapons that maim and kill long after conflicts end. Over the past twenty years, the world has rejected antipersonnel landmines through the Mine Ban Treaty – to which 164 countries are states parties, including every other member of NATO. While still not a signatory, the U.S. has functionally adhered to several provisions of the Mine Ban Treaty – except those that would prohibit the U.S. from ordering the use of landmines on the Korean peninsula. This new landmine policy starkly sets the U.S. apart from its allies and has drawn international condemnation, including from the European Union.

The United States has not used antipersonnel landmines since 1991, excluding the use of a single munition in 2002; it has not exported them since 1992 and has not produced them since 1997. In the last five years, only the government forces of Syria, Myanmar, and North Korea, as well as non-state actors in conflict areas, have used landmines. Of the more than 50 countries that once produced landmines, 41 have ceased production. Under this new landmine policy, the U.S. will rejoin a small handful of mine-producing countries. This is not company the U.S. should keep.

Landmines are capable of inflicting unspeakable destruction and harm on their victims – projecting metal fragments into deep wounds, destroying one or more limbs, causing burns, traumatic brain injuries, blindness and deafness, and of course fatally wounding through decapitation, blood loss or other horrific means.

Landmines violate international humanitarian law and do not follow peace agreements and ceasefires. They continue to kill and maim civilians every day, with children especially vulnerable. In recent years, civilian casualties constituted 71-87% of landmine and other explosive remnants of war casualties - with children constituting 42-54% of civilian casualties where data on age is available, according to Landmine Monitor.

Efforts to enhance the “safety” of landmines, including the development of so-called non-persistent or “self-destruct” mines, ignores the fact that they remain indiscriminate. Regardless of the length of their life-span, they cannot distinguish between a combatant or a civilian while active. If the self-destruct or self-deactivation mechanisms were to fail, they would remain lethal and the potential exists for the components to be repurposed into improvised explosive devices.

The way in which landmines are delivered has changed over time. Rather than being planted and mapped by hand, U.S. mines would be dropped from aircraft or deployed through artillery – indiscriminately scattering them over wide unmarked terrain. This could cause civilian harm, including to humanitarian aid workers and peacekeepers who have no way of knowing if they are in a mined area or where mines might be placed.

The International Campaign to Ban Landmines and its American coordinator Jody Williams received the 1997 Nobel Peace Prize for their efforts to bring about the Mine Ban Treaty. We are proud to be part of the mine ban movement, which continues to make a massive contribution towards global peace and security. Under the provisions of the Treaty, large swaths of territories have been cleared and put back to productive uses. While there are still too many casualties annually, we have seen a dramatic decline since the Treaty came into being. To roll back the progress the global community has made would not only be a tragedy but an affront to the dignity of landmine survivors around the world.

Center for Civilians in Conflict

Church of the Brethren, Office of Peacebuilding and Policy

Doctors of the World USA

The United Methodist Church – General Board of Church and Society

Association of University Centers on Disabilities

Watchlist on Children and Armed Conflict