Joint Statement and Call to Action on the Crisis in Haiti 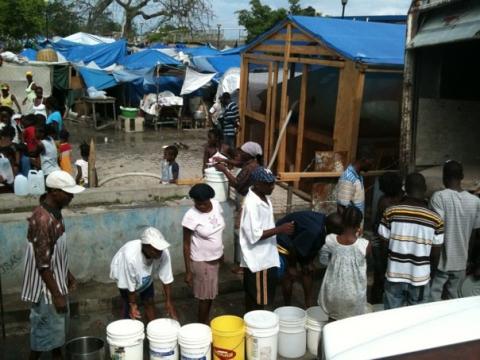 The Maryknoll Office for Global Concerns joined 145 organizations in releasing the following statement on the crisis in Haiti.

Read the statement as a PDF. The PDF version is also available in Kreyol.

In response to the crisis in Haiti, which has deepened in the wake of the assassination of President Jovenel Moïse, we, the undersigned individuals and organizations, express our condolences and sympathy to all of the Haitian families that have lost a loved one to the ongoing violence. We further recognize that activists and human rights defenders in Haiti are currently facing grave danger as they continue to work for a better future for all Haitians.

In light of the horrific events of the past month in Haiti, including the massacre at Delmas 32 and the high profile killing of prominent activist Antoinette Duclaire and journalist Diego Charles; the ongoing gang fighting and arson attacks in poor neighborhoods that have displaced more than 18,000 people; and the shocking assassination of Jovenel Moïse in his home on the night of July 6-7;

Considering that the Haitian people have been living in a brutal climate of insecurity that makes it hard to get to work, and that there is a growing food crisis; that crops have failed as a result of rising temperatures
and climate disruption; that gang violence has blocked roads and shut off access to markets, and more than 4.4 million people do not have enough food to eat every day;

Considering that COVID cases are spiking, and that lack of security and gang violence make it impossible for life saving materials to reach hospitals in other parts of the country while also blocking the capital’s main petrol depot, leading to massive gas shortages;

We call on the international community to stand in solidarity with Haitian calls for:

(1) A Haitian solution. Haitians should lead in building the path forward. Foreign actors must not impose solutions from abroad. Even prior to Moïse’s murder, Haitian organizations have been building consensus for a transitional government. Foreign governments and international institutions must not overstep their role by declaring who has authority in Haiti, particularly when that conflicts with Haitian law.

We need only look to the recent MINUSTAH mission to see that foreign efforts fail to create lasting public democratic institutions that are necessary for any country to function. Despite spending 13 years and $7 billion -- ten times Haiti’s GDP-- the MINUSTAH mission left Haiti with more guns and less democracy. The mission also afflicted Haiti’s citizens with sexual exploitation and abuse, leaving behind hundreds of children fathered by peacekeepers, and was responsible for introducing cholera to Haiti, killing an estimated 10,000 people.

(2) A commitment to a participatory democratic process. After decades of foreign intervention and aid policies that have destabilized Haiti, each branch of the Haitian government has been systematically dismantled, and public confidence in Haiti’s governance has declined to nearly nothing. Haitian organizations and civil society have long been calling for a transition government to restore stability, basic security, and democracy. Haiti must have a transition process in order to rebuild its democratic institutions, and this process must be inclusive of all sectors of Haiti’s population.

(3) Ensuring that conditions for fair, participatory, and credible elections are in place before rushing Haiti to the polls. Elections are a fundamental part of the democratic process. However, they must be free and fair and perceived as legitimate in order to strengthen democracy. Elections will not be free and fair without inclusive voter registration, an independent and legitimate electoral body, and the security necessary not only to vote, but also to campaign leading up to election day. Meaningful participation requires that women and other marginalized groups also participate in the electoral process. A race to hold elections on an internationally-imposed timeline risks further eroding democracy in Haiti.

(4) Protection for the right to free expression and the right to life. Over the past three years, all Haitian people have learned that there is no safety; there is no guarantee that they will make it home when they leave. Human rights defenders, journalists, and activists are frequent targets of threats and attacks, and essential health care workers have been injured and killed through kidnappings, attacks and gang violence. Gender-based violence, including rape, has been increasing during this crisis, and thousands of women and girls have been displaced from their homes, making them even more vulnerable.

Three years ago, on July 6-7, 2018, the emerging evidence that government officials had stolen more than $2 billion from state coffers and rising gas prices sparked the first in a series of protests against corruption and impunity. These massive mobilizations of Haitians across class and political lines marched together to call for accountability and democracy. They were consistently met with brutal repression from the government and indifference from the international community.

There have been 18 massacres documented in Port-au-Prince over these past three years. Perpetrators have targeted neighborhoods active in opposition protests, and have not been held accountable. Human rights groups have documented connections between officials and the armed groups responsible for these massacres, including Moïse and other government ministers. Further, some argue that these massacres constitute crimes against humanity.

(5) Recognition of how foreign interventions have contributed to current conditions in Haiti. While many are calling Haiti a “failed state”, what we see is the failure of centuries of policies imposed on Haiti by the international community, including aid policies, that prioritized foreign interests and short-term gains over sustainable democracy and prosperity for Haitians. The 2010 earthquake was an opportunity to rebuild Haiti with strong public institutions. However, despite hundreds of millions of aid dollars, Haiti’s entire public administration was outsourced to foreign institutions and NGOs.

For a stronger Haiti,