First Anniversary of the Death of Jakelin Caal Maquin 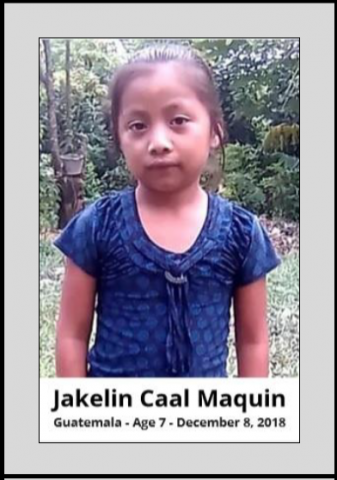 The Maryknoll Office for Global Concerns remembers Jakelin and calls on the U.S. government to end the inhumane treatment of migrants.

Read the PDF version of the statement

The Maryknoll Office for Global Concerns continues to lament and strongly condemn the treatment of migrant children at the U.S.-Mexico border on the first anniversary of the death of Jakelin Caal Maquin, a seven-year-old Guatemalan migrant girl who died in United States custody in El Paso, Texas on December 8, 2018.

Jakelin is one of seven children who have died while in U.S. custody on our southern border or immediately following release from custody. Before December 2018, no child had died in U.S Customs and Border Protection custody in over a decade. These deaths are a result of the increasingly unjust and cruel border policies that seek to deter migrants from entering the United States, seemingly at any cost. Migrants, including children, often do not receive due process rights in U.S. custody and are subjected to inhumane treatment, including the separation of young children from their families.

These policies are unacceptable. Maryknoll missioners live in countries around the world, following Christ’s command to go out to the margins and build solidarity with God’s people. Respect for the dignity of migrants, especially children and families, is central to our Catholic identity and our baptismal call to mission. As we join other communities of faith in a prayer vigil at 5 p.m. on December 9 in front of the U.S. Customs and Border Patrol office in Washington, D.C to mourn the death of Jakelin, the other deceased migrant children, and the failure of our nation to protect the vulnerable, we call on the U.S. government to end the inhumane treatment of migrants, especially children, and to build just and humane immigration and border policy that respects the dignity of all people.