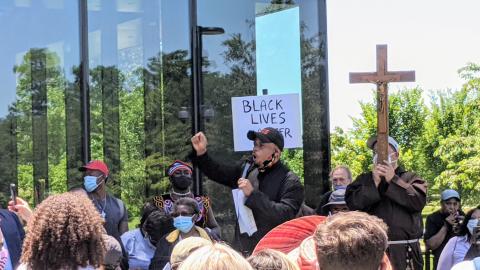 Read the letter as a pdf.

As faith leaders representing a broad array of religious beliefs and faith traditions, we are horrified and outraged by the killing of George Floyd and the ongoing violence inflicted on black people and people of color by unjust policing across our nation. Yet again, we see the persistent sin of racism that resides within hearts and social structures in the United States, where some people are treated as less than human, where police are too often a source of fear in communities of color rather than a source of protection, and where the sanctity of human life is not upheld. We echo the call of the prophet Amos to “let justice roll down like waters, and righteousness like an ever-flowing stream” (Amos 5:24).

George Floyd’s death occurred within mere weeks of other racist acts of violence in the United States, and in particular part of a continuum of police violence in communities of color that has lasted generations. Our hearts ache for Breonna Taylor, killed by police officers who forced their way into her home in Kentucky, and Ahmaud Arbery, killed by white men while running in Georgia. We stand in solidarity with communities across the country expressing their grief and outrage, who feel their voices are not heard. And we join them in asking what will it take to finally transform our criminal justice system and our broader society to reverse the social oppression and violence directed at people of color.

We affirm the enduring faith-rooted teachings that without justice there can be no peace. We recognize the importance of protest alongside and as a form of advocacy. All levels of government must enact the reforms necessary to root out this country’s systemic racism.

We call on Congress to enact long overdue policing reforms, such as eliminating federal programs that provide military equipment to law enforcement. Congress needs to raise the use of force standard for police and require the use of de-escalation techniques. Congress should also deem excessive measures federal civil rights violations (such as neck holds, chokeholds, and other maneuvers that restrict blood flow to the brain).

These deaths occurred at a time when black and brown communities have already been disproportionately impacted by COVID-19, causing high infection rates and economic devastation in black communities. The novel Coronavirus pandemic has made plain the systemic injustices perpetuated against communities of color.

Accordingly, we call on Congress to enact laws that reverse policies that perpetuate the racial income and wealth gap in our nation – a gap that has existed from slavery and is as wide today as it was in the late 1960s.i Even the CARES Act, a crucial response to COVID-19, demonstrates a policy bias toward the wealthy by giving 43,000 millionaire households more money than was given to all of the hospitals in dire need.ii

Our country has never fully atoned for its original sin of slavery and the preceding centuries of racial discrimination in law and in culture. We as a people must come out of COVID-19 crisis, out of the racist events in Minneapolis, Louisville, and around the country resolved to repair past damages done to people of color in the United States as a result of slavery and systemic racism.

Justice can no longer be denied. The stain of a racist system perpetuates violence on black and brown people in the United States each day. We as people of faith are duly bound to follow a spiritual call not to conform but to transform our society by the power of God’s love working through us.

We are holding you in our prayers.

Sr. Brigid Lawlor, RGS
Congregation of Our Lady of Charity of the Good Shepherd