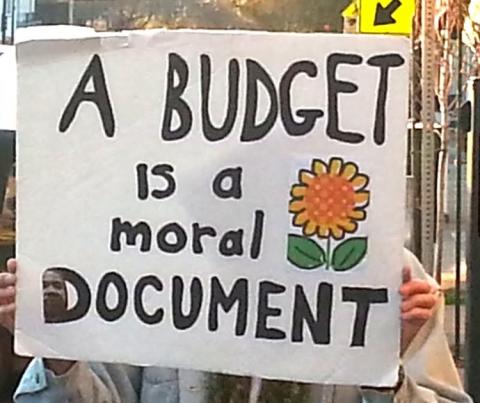 On November, 15, 2018, the faith community reiterated its call for members of Congress to oppose increased funding for deportation, detention, and border enforcement. Congress must decide how much to spend on immigration enforcement and border militarization by Dec. 7. The thirty-seven organziations that signed the letter believe Congress should reduce funding for detention and border wall construction and instead invest in alternatives to detention and oversight of existing enforcement.

See the full text of the letter below.

As 37 national, faith-based organizations from many different traditions, we stand opposed to the existing, unconscionably high levels of unchecked and unaccountable spending on deportation agents, detention beds, and militarized border enforcement included in the Department of Homeland Security’s budget. We have witnessed how this spending tears families apart, leaves vulnerable populations unprotected, and erodes our shared value to welcome the stranger. As you consider spending levels for the rest of fiscal year 2019 (FY19), we urge you to reduce harmful and reckless immigration enforcement funding and reject any funding above FY18 enacted levels.

Each person caught in our bloated, profit-driven, and unbridled immigrant detention system is a child of God and deserves to be treated with humanity and dignity. Nearly 45,000 people per day are detained by Immigration and Customs Enforcement (ICE) - an unprecedented high and resulting in spending levels above what Congress appropriated in FY18. Multiple reports showcase the systemic abuse within the detention facilities, including use of force by officers, deaths stemming from medical negligence, and arbitrary use of solitary confinement. In addition, reports have documented unconstitutional, dangerous conditions in Customs and Border Protection (CBP) holding facilities, such as freezing, overcrowded, and filthy cells; deprivation of beds, bedding, and sleep; and inadequate food, water, medicine, medical care, and basic sanitation and hygiene items. Faith communities witness firsthand the psychological and medical toll incarceration takes on those detained, their families, and our communities. Congress must stop rewarding ICE and CBP for abhorrent detention conditions and opaque overspending, and instead reduce immigration detention funding, exert oversight over detention practices, and direct the administration to restore less costly, more efficient, and humane community-based alternatives to detention.

Harmful border enforcement policies drive asylum seekers, migrants, and other vulnerable individuals into more dangerous and often deadly routes. This administration’s border priorities are fiscally irresponsible and a humanitarian disaster, and do not make our nation any safer. The deleterious ecological, economic, and human impact of militarizing border communities cannot be overstated. This includes walls, fencing, and increased enforcement. Currently, fences and walls are planned that will cut through private farms and ranches, wildlife refuges and state parks, harming landowners and the local tourism industry. Our faith partners in border communities are asking for Congress to invest in their schools, businesses, and healthcare - not needless military build-up. Congress must not allocate any more tax dollars to the dangerous myth that walls and militarized infrastructure bring security, and instead listen to border residents’ call for sound, humane immigration and border policies that facilitate community wholeness.

Every day families are separated at the hands of a punitive, outdated immigration system. Especially galling have been the “zero tolerance” border prosecution policies that resulted in mass family separations. This year, we witnessed a horrendous abuse of power as ICE and Border Patrol agents tore children away from their parents as they presented themselves at the border asking for protection and relief from violence and extreme need. Moreover Congress has yet to act to provide permanent protections for many vulnerable populations including Deferred Action for Childhood Arrivals (DACA) recipients, Temporary Protected Status (TPS) holders, and others who have been long-time contributors to our nation and need immutable protections. Ramping up the number of agents who could carry out a large scale deportation of these populations will needlessly separate more families, as well as contribute to worker shortages in numerous industries including construction, education, and health care. To hold ICE and CBP accountable to the standards of common sense, integrity, transparency, and humanity, Congress must stop the unrestrained funding for, and expansion of powers to, the agencies fueling family separation and incarceration.

Every dollar further entrenches an immoral system fueling mass incarceration, family separation, human rights violations, and unaccountable enforcement in our communities. We urge Congress to end this pattern and to faithfully take concrete and substantive steps to reduce funding for unchecked immigration enforcement.

Church of the Brethren Office of Peacebuilding and Policy

Conference of Superiors of Men (Catholic)

Congregation of Our Lady of Charity of the Good Shepherd, US Provinces

National Justice for Our Neighbors

Sisters of Mercy of the Americas, Institute Leadership Team