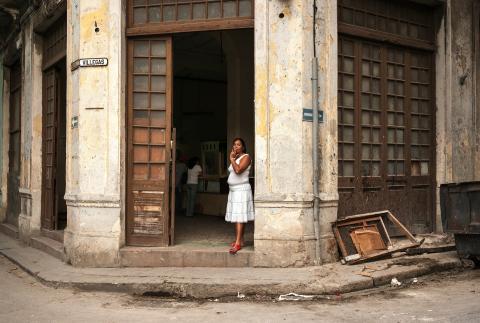 The Maryknoll Office for Global Concerns joined a coalition of faith-based organizations in sending the following letter to President Biden, urging him to work to improve U.S. relations with Cuba through taking several key steps.

As religious institutions and faith-based humanitarian aid organizations, many of us with longstanding ties to Cuban faith communities and people, we greatly appreciate your pledge “to reverse the failed Trump policies that inflicted harm on Cubans and their families.”

We advocated for and strongly supported the Obama Administration’s groundbreaking U.S.-Cuba policy changes. While our two governments have significant disagreements, these are best addressed through respectful dialogue and engagement. Reinstating these Obama era policies at this time is critical. Ordinary Cubans, including members of churches and of other religious communities, were suffering increased unemployment and hunger because of the Trump Administration restrictions, even before the devastation of COVID travel restraints.

Religious freedom and religious life have grown dramatically in Cuba in the last two decades, and religious attendance – among Catholic, Orthodox, Protestant, Jewish and Muslim communities – has grown as well. The faith community is playing a greater role in the life of the Cuban people, and we look forward to its continuing growth and expansion. Reversing the Trump Administration policies and taking new steps toward full normalization will help further religious freedom and human rights in Cuba. We believe the U.S. can achieve these aims through engagement rather than through a punishing sanctions regime. Re-engagement will also uphold the religious freedom of Americans to engage with the Cuban people.

We ask you to take executive action that returns the regulations governing travel, remittances and trade with Cuba to where they stood on January 20th, 2017. The Trump administration restricted remittances sent by churches, Cuban-Americans and other U.S. persons to families in Cuba, limited family travel and restricted people-to-people travel for all U.S. citizens, limited agricultural exports to Cuba, and weakened the opportunities for trade and investment that benefit U.S. society and the Cuban people, especially in the growing Cuban private sector. We urge you to immediately reverse these measures.

We also ask you to reverse by executive action the Trump Administration decisions to reinstate Cuba on the list of “State Sponsors of Terrorism,” and to permit private lawsuits against third country investors in Cuba under Title III of the Cuban Liberty and Democratic Solidarity Act of 1996 (LIBERTAD Act).

We urge you to rebuild the U.S. diplomatic presence in Cuba, fully staffing our embassy, especially our consular staffing. While we need to be alert to potential health concerns and the safety of our diplomats, it is clearly in U.S. interest to fully staff our embassy. We urge you to resume all consular services that would permit Cuban citizens to re-engage through travel with their families in the United States and with U.S. society more broadly. This will vitally expand the religious, cultural, artistic, environmental, educational, scientific and athletic exchanges between our societies. It’s particularly important to U.S. religious communities that Cuban clergy and faith leaders be able to travel readily to the United States to participate in faith-based conferences and other religious events.

Fully staffing our embassy will facilitate bilateral dialogues on issues of mutual interest. In line with this, we urge you to allow parallel increases in the staffing of the Cuban embassy here in the United States.

We and our faith partners in Cuba have long called for an end to the U.S. embargo on Cuba, and the development of normal relations between our two countries. We are convinced that it
is in the interest of both the United States and the Cuban people to move forward with normalization.

The process of normalization will benefit people of faith and religious organizations in Cuba and the United States by creating more opportunities for mutual support and encouragement. It will benefit the Cuban people who are facing difficult economic and humanitarian circumstances and respond to concerns about their well-being among the Cuban-American community here in the United States.

Our country will benefit as we expand cooperation on issues of mutual interest including addressing the COVID-19 pandemic, climate change, security, people-to-people relationships, and increased travel, trade, and commerce. And it will enable Cuba to engage more readily in its own internal processes of reform and political debate. We are convinced that it is in the interest of both the United States and the Cuban people, and in particular beneficial to religious communities in Cuba, to move forward with normalization of U.S.-Cuban relations

We commit ourselves to support you in these actions, and to encourage Members of Congress to support U.S. engagement with Cuba and bring an end to the embargo.

Please know that you and your family, Vice President Harris and your Administration are in our prayers.