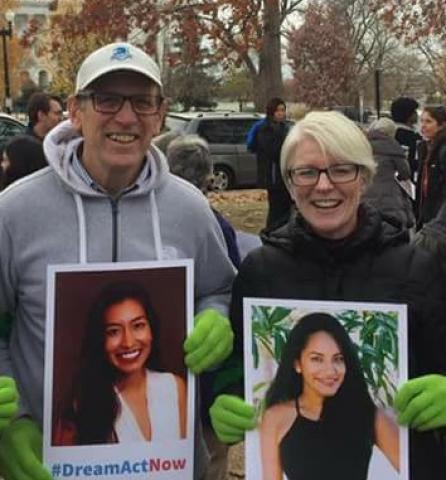 In Gratitude for Gerry Lee

It is with a mix of sadness and gratitude that the Maryknoll Sisters, the Maryknoll Fathers and Brothers and the Maryknoll Lay Missioners announce the resignation of the Director of the Maryknoll Office for Global Concerns (MOGC), Gerry Lee, due to sudden illness. Gerry has been a transformational leader for MOGC and will be greatly missed by our staff and partners in Washington, D.C. and New York, as well as Maryknoll missioners around the world.

Under his stewardship, MOGC embarked on numerous new and exciting efforts for building pathways for peace and social justice. Most recently, MOGC joined CIDSE, a network of 18 Catholic international development and social justice organizations working for justice and peace through global solidarity. Also, as a member of Pax Christi International, MOGC joined in the landmark conference on Nonviolence and Just Peace in Rome in 2016. Gerry was a foundational member of the steering committee that organized the conference and an active participant in the dialogue at the conference that led to the birth of the Catholic Nonviolence Initiative (CNI). Over the nearly three years since the conference, Gerry led one of the CNI's roundtables for further thought development on the teaching of nonviolence in the Catholic Church. His passion and expertise in the areas of Catholic social teaching, human rights, peace and nonviolence were essential to the continuation of the dialogue with the Vatican's Dicastery for Promoting Integral Human Development and the Dicastery's commitment to a second gathering in Rome this coming April.

Gerry is now focusing on his health and spending time with family. He leaves MOGC in a strong position with the confidence of an outstanding staff to continue to bring the voice and experience of Maryknoll missioners into important debates with public policymakers.

The Maryknoll Sisters, the Maryknoll Fathers and Brothers and the Maryknoll Lay Missioners are pleased to announce the appointment of Susan Gunn as the new Director of the Maryknoll Office for Global Concerns. Susan has worked with MOGC since 2012, most recently as Interim Director. "I am grateful to Gerry and the leadership of the Maryknoll entities for their support and for this opportunity to carry on the MOGC mission," Susan said.

Susan previously served as Office Manager and Communications Manager for MOGC. Her overseas experience was in mainland China beginning in 1991. While there, she studied Chinese in Beijing and worked in several different parts of the country. From 1993-97 she taught English to middle school teachers at rural teacher-training colleges in Fujian, Anhui, and Jiangsu provinces, sponsored by the Amity Foundation, the largest charity in China, and the National Council of Churches in the U.S.A. Susan also worked as a volunteer at Prem Dan, the house for the destitute and dying, run by the Missionaries of Charity in Kolkata, India. She has a Master’s degree in International Development Management from American University and lives with her husband and three daughters near Washington, D.C.

Photo: Gerry Lee and Susan Gunn carry photos of DACA and TPS recipients during a demonstration for justice for immigrants at the U.S. Capitol Building, December 6, 2017.