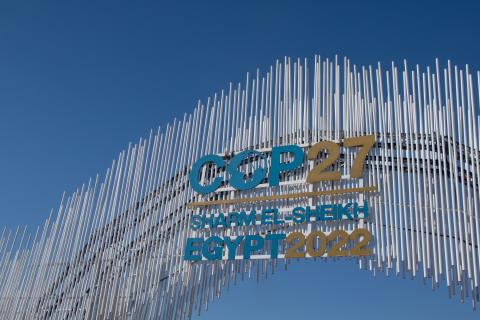 WASHINGTON, DC – Senior Program Officer for Faith, Economy, and Ecology at Maryknoll Office for Global Concerns, Lisa Sullivan, made the following statement on the conclusion of COP 27 in Egypt:

“A dramatic, final-hour breakthrough agreement was reached at the 27th annual UN Climate Conference in Egypt, establishing a ‘loss and damage’ funding mechanism for countries hit hardest by climate disasters. This defining moment of the COP conference was a remarkable diplomatic victory led by small, climate-vulnerable countries who have felt the brunt of climate change for years, together with global climate justice activists.

“While details of this financial system are yet to be worked out, there were important, strong calls for major reform of international finance institutions to unlock more finance for climate action, including action on debt reduction.

“But while one victory was celebrated, there was deep disappointment in the failure of the conference to take necessary action to keep global temperature rise below 1.5°C. This was in no small part due to the corrupting presence of fossil fuel companies at COP27 that, along with some of the highest greenhouse gas emitting nations, pushed back on any new language on phasing down or phasing out all fossil fuels – the only true solution to securing a livable future.

“Another disappointment was the failure to address the necessary transformation of food and agriculture systems, a significant source of global greenhouse gas emissions. While this issue did garner greater attention at this year’s conference, it was trounced by a backdrop of rising global hunger.

“The United States came to the table hoping to take a role as a climate leader, with its most significant piece of federal climate policy newly under its belt. But the largest historic contributor to global greenhouse gas emissions was loudly scolded for not following through on financial commitments to help developing countries mitigate emissions and adapt to climate change. Time is at a premium before the end of the year for Congress to pressure President Biden to fulfill his international climate finance pledges.

“Effective global climate action will only be possible when all voices are at the table. Women, young people, and Indigenous communities have led the movement for greater climate justice-centered climate action and achieved an important victory for loss and damage at this COP. We call on the UNFCCC to assure that these voices, often excluded due to spiraling costs of attending such events, may be present at the next year’s COP28 so that decisions necessary to the whole world’s future may be made.”

Photo by Matthew TenBruggencate at Unsplash