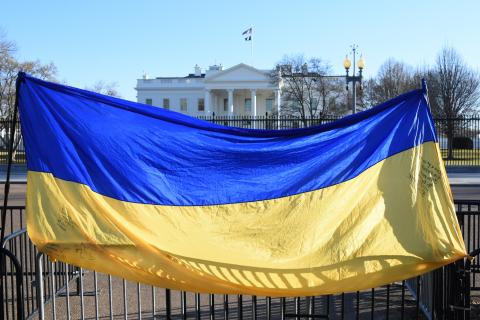 Read the Press Statement as a PDF

The Maryknoll Office for Global Concerns sent a letter, signed by 29 national Catholic organizations, to President Joe Biden urging him to pursue diplomacy and dialogue to avoid nuclear war with Russia and to rid the world of nuclear weapons. More than 400 individuals so far have completed our action alert with the same message to the president.

The Catholic organizations’ directive to the Catholic president was direct, though open-ended. It cited papal denunciations of nuclear force and threats of the same. It also cited “Nuclear Famine,” a secular report by the group International Physicians for the Prevention of Nuclear War. The horrors of nuclear war, though not fully comprehensible even in relatively small-scale use, is of vital concern to all humanity. For Catholics, nuclear disarmament is also our duty: inextricable from our faith.

“To work for peace in times of conflict requires imagination and faith. We hope President Biden is inspired by his Catholic faith, to see beyond the boundaries of race, religion, and nation, to keep pursuing diplomacy and dialogue, and not get caught in an escalation of arms but rather keep turning attention to the care for our common humanity that makes us all brothers and sisters on this one Earth.”

“Maryknoll missioners understand that the threats of nuclear warfare coming from Moscow endanger Ukrainians, but also every community where Maryknoll missioners live and work around the world, every person on Earth, and our common home. We, as citizens of a nuclear superpower and as Catholics, have a unique responsibility to call upon our leaders, and especially our Catholic president, to heed the prophetic teachings of our church: to seek de-escalation and a swift diplomatic resolution to the war in Ukraine, to refrain from using our own nuclear weapons should Russia use theirs, and to seek dialogue with Russia aimed at total nuclear disarmament. We must rid the world of this existential threat to life as we know it.”

“As Franciscans, we feel deeply the sacredness of all human life and kinship with all creation. We consider any use of nuclear weapons unthinkable and pray for nonviolent paths to a just peace. We appeal to President Biden to do all within his power to prevent the use of nuclear weapons in this devastating Russian war against Ukraine and to instead turn this moment of threat into an opportunity to return to a serious path towards total nuclear disarmament.”

“We keep the human dignity of each and every person front and center in our advocacy and in the ministries led by the Sisters and Lay Partners of the Congregation of Our Lady of Charity of the Good Shepherd. Through this prism, there is zero benefit to even the retention of nuclear weapons. The people of Ukraine are front and center in our prayers for peace in that country, as are the people of Russia caught in the web of war. We pray for a swift and peaceful end to the invasion and we pray for common sense to prevail. Finally, we pray especially for you, Mr. President, that you may lead our country and the world safely out of the nuclear dangers we are facing.”

"As our world confronts the existential threat of nuclear war, the Association of United States Catholic Priests (AUSCP) is compelled by conscience to sign this letter to President Biden. It is a graced opportunity for our nation to initiate the first concrete steps toward nuclear de-escalation and disarmament."

Read the Full Letter and List of Signatories Here