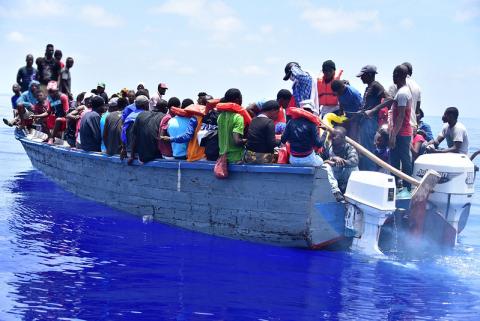 On the one-year anniversary of the human rights disaster in Del Rio, Texas, 20 organizations delivered a petition to the White House asking the Biden administration to halt all removals of Haitian migrants, including interdictions and repatriations at sea. The petition also appeared in The Hill and included over 600 individual signatures alongside co-sponsoring organizations.

We call on President Biden and Secretary Mayorkas to halt all removals to Haiti immediately. The humanitarian crisis in Haiti continues to worsen. The United Nations special rapporteur on human rights stated in May that, “Armed violence has reached unimaginable and intolerable levels in Haiti.”

The numbers are shocking. The administration has expelled 26,700 Haitians since taking office, well over 24,400 just since September of 2021. At least 9,000 of those removed have ended up in Port-au-Prince, which has seen an explosion of violence between warring gang factions. Adding thousands of refugees into this situation is a cruelty without measure.

No other president has deported so many Haitians in so short period of time.  Additionally, since October of 2021, the Coast Guard has interdicted at least 7,137 Haitian migrants at sea. In most cases, they have been immediately returned to Haiti.

We join with human rights organizations and Members of Congress in calling on you to stop these expulsions. The United States should be providing humanitarian parole to Haitian refugees, not sending them back to the extraordinary dangers they will face.

Faith in action: Sign the petition to end U.S. expulsions of asylum-seekers to Haiti https://bit.ly/QuixotePetitionHaiti