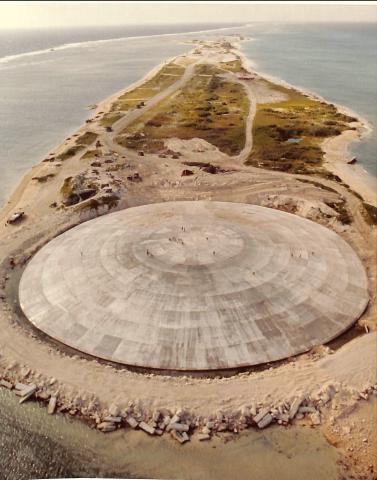 We are writing to respectfully urge the White House and the Department of State to prioritize issues of nuclear justice in the ongoing negotiations between the United States and the Republic of the Marshall Islands (RMI) on an updated Compact of Free Association (COFA).

As you know, between 1946 and 1958, the United States government conducted high-yield nuclear weapons test explosions in the atmosphere and underwater in the Marshall Islands, which produced profound and long-lasting adverse health, environmental, and cultural impacts.

As the 2012 report by the United Nations Special Rapporteur on the impact of the U.S. nuclear testing program on human rights in the RMI concluded:
“The nuclear testing resulted in both immediate and continuing effects on the human rights of the Marshallese...radiation from the testing resulted in fatalities and in acute and long-term health complications. The effects of radiation have been exacerbated by near-irreversible environmental contamination, leading to the loss of livelihoods and lands...many people continue to experience indefinite displacement.”

The scale of nuclear testing was immense. The 67 U.S. atmospheric nuclear weapons tests—23 at Bikini Atoll and 44 at Enewetak Atoll—spewed radiation over the entirety of the Marshall Islands and produced a total explosive power of 108.5 megatons (TNT equivalent). That was about 100 times the total yield of all atmospheric tests conducted at the Nevada Test Site.

These dangerous nuclear detonations produced incalculable harm to the land and people of the Marshall Islands. Whole islands were vaporized by these tests. Radioactive fallout affected all of the islands, and lingering radioactive contamination has made some islands uninhabitable. But to this day, the only individuals considered by the United States as impacted by U.S. nuclear testing are those specified in Section 177 of the original Compact: the people of Rongelap, Utrik, Bikini, and Enewetak atolls, including their descendants.

The U.S. nuclear tests have led to serious illnesses such as radiation poisoning, elevated cancer rates, birth defects, and contamination of food and water sources that continues to this day. The nuclear test explosions seriously disrupted cultural traditions and ways of life. Many Marshallese were dislocated and exiled from their homes; many are still unwilling or unable to return, especially given that the RMI does not have the capacity to independently determine the risks and to monitor them. A massive nuclear waste site, the Runit Dome, is leaking and is threatened by rising sea levels and the possibility of stronger storms due to climate change.

The U.S. government clearly has an ongoing moral obligation to help address the adverse impacts of nuclear testing in the Marshall Islands. We do not believe that any new Compact of Free Association can be considered fair or equitable without fully addressing these issues in a way that is acceptable to the Marshallese people.

While we defer to the Marshallese people and leaders involved in the negotiations of the Compact to determine the specific provisions relating to their longstanding claims for nuclear justice, we want to add our voice to the calls from many quarters—from Marshallese people, to the RMI National Nuclear Commission, to the halls of Congress—for:

We were pleased to see that following the Pacific Islands Summit in September 2022, the United States declared that it remains “committed to addressing the Republic of the Marshall Islands’ ongoing environmental, public health concerns, and other welfare concerns.”

In addition to the deadly legacy of U.S. atmospheric nuclear testing during the Cold War, the people of the Marshall Islands are on the frontlines of the unfolding global climate disaster. Now is the time for the United States to step up and meet its responsibilities by delivering on these important steps for Marshallese people through the new Compact of Free Association.