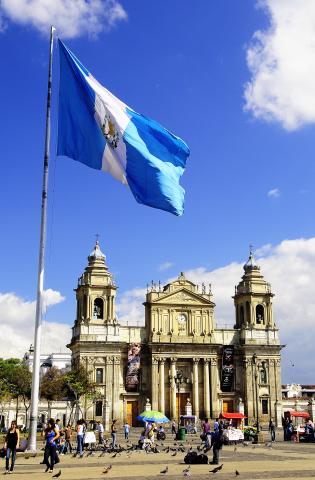 The Maryknoll Office for Global Concerns joined a coalition of organizations in sending the following letter to the International Development Finance Corporation (DFC) on concerns about the rule of law in Guatemala and the DFC's investment plans.

We are writing to express our alarm and concern about the rapid deterioration of the rule of law in Guatemala and the implications of this deterioration for investments by the Development Finance Corporation. We are aware that in January 2020 Guatemalan President Alejandro Giammattei signed a memorandum of understanding with the DFC, aiming to catalyze private sector investment of up to $1 billion over three years in support of development in Guatemala. The Guatemala of today, however, is markedly different than the Guatemala of two years ago. Accordingly, we believe the DFC should revisit its investment plans with respect to Guatemala.

A sound investment climate requires stability and strong institutions, as well as consistent adherence to the rule of law. Yet unlike in 2020, Guatemala now has an attorney general who has been placed on the Engel List and whose US visa has been revoked owing to a pattern of obstruction of investigations into corruption. The first widely recognized instance of such obstruction, in May 2021, was Attorney General Consuelo Porras’ abrupt, arbitrary, and illegal firing of the nation’s top anti-corruption investigator, Juan Francisco Sandoval. Sandoval, who had evidence implicating President Alejandro Giammattei in corruption, fled into exile. The embassies of Sweden, Switzerland, France, Germany, Great Britain, Canada, and the United States in a joint statement as members of the G-13 Donor Group called the attorney general’s firing of Sandoval “part of a pattern of instability and institutional weakening that affects the rule of law in Guatemala.”

The Attorney General’s Office has been weakened even further since last May, as independent prosecutors have come under increasing attack. Since the start of 2022, three more anti-corruption prosecutors have fled into exile. Attorney General Consuelo Porras in the month of February alone issued seven arrest warrants for high-level prosecutors or former prosecutors investigating cases of corruption. Six of these conscientious, independent investigators were arrested on spurious charges. The judicial system, too, has been systematically weakened. Judges presiding over corruption and transitional justice cases face dozens of baseless lawsuits, threats to remove their judicial immunity, and in at least one case, the actual removal of judicial immunity. The very justice system in Guatemala is in danger. Moreover, the refusal of the Guatemalan Congress in April 2021 to seat a Constitutional Court judge who had been re-elected, as well as the decision of the Congress to seat other judges whose records were besmirched by credible allegations of wrongdoing, has resulted in a Constitutional Court that cannot be trusted to act in good faith to defend the constitutional rights of the Guatemalan people.

Without a strong, independent judiciary, Guatemalans whose rights have been violated are left defenseless. In the context of large-scale development projects, this defenselessness is critically relevant. In years past, the Constitutional Court upheld the rights of rural indigenous communities adversely affected by development projects and suspended the licenses of mining and hydroelectric projects that had been operating illegally. In recent months, emboldened by the corruption that characterizes the new Constitutional Court, the Guatemalan government has taken unprecedented steps to facilitate, in violation of Constitutional Court rulings, the operation of such illegal projects.

The case of indigenous Mayan fishermen whose livelihoods and health are affected by a nickel mine in the country’s eastern region illustrates the increasingly blatant illegalities the Guatemalan government is willing to perpetrate, given the now weakened Constitutional Court. The Fishermen’s Guild had won a lawsuit against the mine in 2020; Guatemala’s then effective and independent Constitutional Court ordered the mine to suspend operations, since a proper consultation with the indigenous peoples affected had never been carried out. In 2021, however, the Guatemalan Ministry of Energy and Mines contravened this ruling, beginning a consultation process that excluded the Fishermen’s Guild and other duly elected leaders of the affected indigenous communities. The community protested their exclusion and the continuing deliveries of nickel-processing equipment made to a mine that was supposed to have been suspended. In response, President Giammattei declared a state of siege, suspending basic constitutional rights and sending over 1,000 military and police personnel to enforce the suspension of guarantees. Journalists were arbitrarily arrested; indigenous leaders were arbitrarily arrested; the children of indigenous leaders were beaten; and entire families of leaders fled the area. During the state of siege, with the community heavily militarized and the right to movement curtailed, the Ministry of Energy and Mines held what it called a meeting 75 miles away from the fishermen’s community and later claimed that this meeting was the consultation. With no investigation of human rights violations or of the conditions under which this supposed consultation took place, the mine was granted full permission by the Guatemalan government to resume its operations. Never in the recent history of Guatemala has the operation of a large-scale project been facilitated with the use of emergency powers.

The investment climate in Guatemala is one in which a large-scale transnational projects such as the mine described above can operate in violation of rulings by the country’s highest court and in violation of international treaties the Guatemalan government has signed, such as Convention 169 of the International Labor Organization—and with the assistance of hundreds of soldiers and police officers and the violent suppression of rights.

In addition to the loss of recourse to impartial justice under the current Constitutional Court, another source of protection for Guatemala’s rural, indigenous communities confronted with illegal development projects is being stripped away: last May, the Guatemalan Congress signed into law Decree 4-2020, known as the NGO law. This law severely undermines the protection provided by national and international human rights organizations to rural environmental and indigenous rights defenders. The law accords the right to the Ministry of the Interior to shut down any NGO judged to have taken actions that “alter the public order.” The Inter-American Commission on Human Rights, together with the United Nations Special Rapporteur on freedom of expression, has expressed alarm about the NGO law, saying it “violates international human rights standards and could criminalize human rights defenders and civil society in general.” USAID head Samantha Power in a tweet on May 14 stated, “We strongly oppose actions that stifle or silence civil society organizations in Guatemala.” Whether organizations are shut down or not, the threat of being closed down for the “altering of public order” is a hindrance; nongovernmental organizations cannot operate freely. International organizations that monitor rights and provide protection to human rights defenders, including environmental and indigenous rights defenders, have come under attack in recent months. One such international organization has charges pending, such as “sedition” and “actions against national security,” simply for being present as observers at a march where a statue was damaged.

Guatemala’s rural and indigenous people—who already for decades have suffered intimidation and violence, including murder, when they defend their land and environmental rights in the face of extractive industries—are thus newly vulnerable. Increasingly limited monitoring and defense by the international human rights community, no reliable justice before the country’s highest court, and no ability to count on organized civil society to advocate for their rights, since civil society organizations can be closed down at the government’s whim, make for a situation in which the human rights of those affected by development projects cannot be guaranteed. Given this situation, DFC investment in any project situated in rural, indigenous areas of Guatemala should not be considered.

In addition to these concerns, allegations surfaced in February 2022 that Guatemalan President Alejandro Giammattei illegally financed his 2019 election campaign. A protected witness, whose account reportedly has been corroborated by another source, has testified that President Giammattei agreed to receive $2.6 million in bribes negotiated with construction firms to finance his campaign in exchange for granting the firms contracts and advance payments in up to twelve highway construction projects worth more than $191 million. According to the Salvadoran daily El Faro, which broke the story, official documents reveal that eleven of these projects are underway and the last is accepting proposals. The US State Department and the FBI reportedly have copies of the witness’ testimony and are investigating the potential use of US-based banking institutions in the corruption scheme. This allegation of corruption is the second in a year involving the receipt of bribes by President Giammattei in relation to the operations of national and transnational companies.

The undermining of civil society, the capture of the judicial system by corrupt forces, the systematic persecution of corruption investigators, and credible allegations of corruption involving the country’s president himself should lead the DFC to reassess any investment in Guatemala. These factors have created an environment in which the environmental, human rights, and worker rights standards the DFC aims to meet not only cannot be guaranteed but are highly likely to be violated.

We wish you the best as you begin your work at the helm of the DFC, and we remain committed to keeping you informed of our concerns and hearing your views in response.

Center for Gender and Refugee Studies

Network in Solidarity with the People of Guatemala (NISGUA)