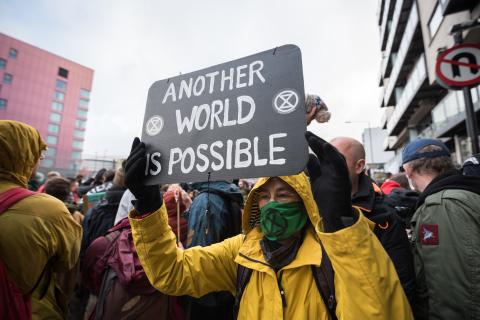 The Maryknoll Office for Global Concerns joined more than 40 Catholic organizations in issuing a statement on the final day of the COP26 UN Climate Talks.

As Catholics, united for our common home, we urgently ask leaders at the United Nations 26th Climate Change Conference to follow Pope Francis' leadership in reaching a prophetic final agreement.

The science is clear: an extractive, unsustainable economy, fueled by fossil fuels, is causing the climate crisis that's destroying God's creation and harming the most vulnerable among us the most, those who have done little to cause the crisis.

We owe it to our poorest sisters and brothers, future generations, and all of God's creation to seize this historic opportunity. In 2015, Pope Francis wrote in Laudato Si’ that fossil fuels need “to be progressively replaced without delay." Now, in 2021, we have reached a decisive moment. We must reach an agreement in Glasgow that sets a clear and ambitious timeline for a just transition away from harmful fossil fuels. Setting out such a pathway is an essential step to accelerating investment in a clean energy future for all.

As Catholics, we have other priorities for the final agreement as well, ensuring human rights and environmental safeguards, recognizing the rights of Indigenous Peoples and Local Communities and keeping the commitment of 1.5 degrees. It is also essential that the final declaration reaffirms the commitment to climate finance for adaptation, as well as loss and damage.

But above all, a final agreement must deliver on a clear pathway forward to a just transition away from an extractive economy based on fossil fuels, the root cause of the climate crisis. We will continue working and praying for that prophetic outcome.

Photo: A woman holds a sign reading 'Another world is possible', as people rally outside the perimeter of the COP26 venue on the last day of COP26, in protest against inaction upon governments and negotiators to mitigate the climate crisis. November 12, 2012, Glasgow, Scotland. Photo courtesy of LWF/Albin Hillert