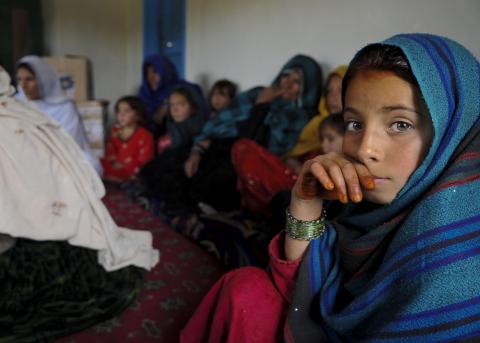 The Maryknoll Office for Global Concerns joined 17 faith organizations in releasing the following statement on U.S. policy on Afghanistan on Oct. 18, 2021.

As members of a diverse body of ecumenical and interfaith advocacy organizations, we are committed to seeking a more just and peaceful world for all people. We believe that United States policies, strategies and actions should thus be consistent with human dignity, racial justice, ecological care, and conflict transformation. In our present political context, we are especially concerned for the people of Afghanistan who are currently facing many challenges simultaneously. Many Afghans are being evacuated to the U.S. or fleeing to neighboring countries while those who stay are dealing with threats of violence, drought, food insecurity, and economic downturn.

After 20 years of war and violence, it is evident that military intervention has not been, nor ever will be, the optimum option for restoring peace and stability to conflict areas. Immediate and sustained actions must be taken to mitigate the tremendous suffering and consequences of the occupation in Afghanistan and to ensure that future needless and costly wars are averted. First, many of our organizations have already been supporting the evacuation of vulnerable Afghans and anyone fleeing violence or persecution. All people have the basic human right to feel safe and secure and have the legal right to seek refuge or asylum in another country.

For at-risk Afghans who were unable to flee the country, the U.S. should expand and expedite life-saving protections including the Priority 1 and Priority 2 visas. Association with the U.S. government or U.S.-funded organizations puts individuals at risk, but as air and land borders close, individuals are faced with few options. The United States should expand protections by offering avenues for activists, journalists, religious and ethnic minorities, and humanitarian workers to apply for visas from within the country.

Most of our new Afghan neighbors have entered the United States with humanitarian parole status, which is temporary immigration relief and does not make them automatically eligible for refugee resettlement services. As agencies and communities prepare to welcome Afghans, we applaud Congress for taking action and passing the FY 2022 Continuing Resolution, which includes measures to ensure Afghan evacuees receive these important resettlement and integration services and that agencies and local communities have the funds to implement them. However, it is critical that Congress urgently build on this by providing and passing additional supplemental funding and legislation that makes it possible for Afghans arriving with humanitarian parole to apply for legal permanent residence in the U.S., such as an Afghan Adjustment Act.

We also understand that the vast majority of Afghans will not be willing or able to leave their homes and will instead face other impending crises. For example, Afghanistan is suffering from the impacts of climate change which has led to drought and dramatic food insecurity. According to The UN World Food Programme (WFP), “one-in-three Afghans, or 14 million people, are hungry today and two million malnourished children urgently need treatment”. Unfortunately, these issues have been exacerbated by the violence of the past 20 years. The U.S. government, following the lead of the UN and other multilateral institutions, should deliver robust humanitarian aid to the people of Afghanistan in the form of medical and food resources to ensure that suffering does not continue unabated. Long term solutions should come from the people of Afghanistan to develop Afghan-led recovery efforts that benefit everyone.

As an extension of this, the United States should refrain from imposing additional sanctions that would restrict ordinary people’s access to basic supplies. The U.S. should also clarify sanctions on the Taliban and offer legal assurances to humanitarian organizations, banks, and providers that humanitarian and peacebuilding activity in Afghanistan will not be sanctioned. With rising food costs and restricted access to financial channels, nearly half of the population relies on foreign aid. Any interruption to lifesaving assistance could be disastrous.

All parties must protect civilians and respect the human rights and freedoms of all in Afghanistan, including those of minorities, women, and girls. Important gains made in recent years – including on gender equality and girls’ access to a quality education – must be preserved, and much more needs to be done to realize the full rights of women and girls. On the part of the U.S., we insist on the cessation of drone strikes in Afghanistan which put civilians at risk and further destabilizes the region. Independent and impartial investigations into human rights abuses should be implemented to promote accountability and justice for the people of Afghanistan and reparations should be granted to victims and their families.

Twenty years ago on October 7, 2001, the U.S.-led coalition officially entered the Afghanistan war by invading Afghanistan and conducting an intense bombing campaign. There were non-military options that could have been considered in responding to the 9/11 attack, more akin to an international police action, investigation and freezing of assets, and regional diplomatic effort. The rush to military action would eventually turn out to be the opening salvo of the War on Terror. Since then, Brown University’s Costs of War Project estimates that at least 900,000 people have died in the post 9/11 War on Terror, including upwards of 387,000 civilians. Millions have been displaced as a result of the fighting and the emissions from the war have contributed significantly to climate change. In financial terms, the Afghanistan War alone has cost a stunning $2.3 trillion, money that could have been better spent providing for basic human needs.

The exorbitant cost of war in financial, human, and environmental terms alone should make us stop and question its use as a tool of foreign policy. Examination of the abject failure of the U.S. policy of military intervention in Afghanistan has proven that the violence of war is not a viable strategy for bringing change or development. Instead, a reasonable and effective foreign policy should include diplomacy, peacebuilding, unarmed peacekeeping, restorative justice, supporting nonviolent resistance, and aid-based endeavors informed by the needs of the people of Afghanistan. Extensive conversations with local and regional organizations in Afghanistan are necessary first steps in order to determine the best ways to engage. Our organizations call upon members of congress and the Biden Administration to completely shift paradigms and prioritize peaceful methods of conflict transformation and foreign engagement, and we will continue to speak out about these issues until that future is realized.