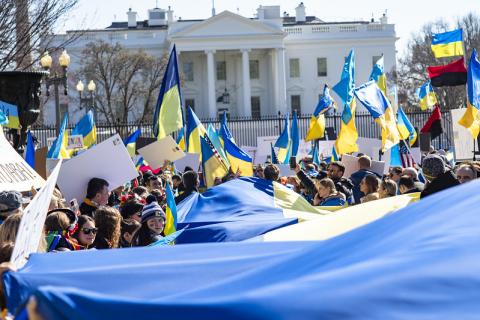 The Maryknoll Office for Global Concerns led 28 national Catholic organizations in sending a letter to Pres. Biden urging him to pursue dialogue with Russia and take steps toward nuclear disarmament.

We are national Catholic organizations working for justice, peace, and the integrity of creation, and we write to you today as our nation’s president and as a brother in faith regarding the dire situation in Ukraine and President Putin’s threat to use nuclear weapons. We condemn Mr. Putin’s threats, and implore you not to respond with nuclear weapons should he carry them out. We urge you to show great restraint, and to do everything in your power to deescalate the conflict, to seek dialogue with Russia, and take immediate, concrete steps toward nuclear disarmament.

Not since the Cuban Missile Crisis has the existential threat of nuclear war been so acute. As Catholics, we know that the possession of these weapons, even for deterrence, is immoral, because it offers only a false security based on a “balance of terror,” because the production of nuclear weapons wastes resources that could benefit the integral development of peoples and the natural environment, and because the mere presence of these weapons means the real and constant possibility of their use. The catastrophic consequences of nuclear war would be disproportionate to any good that might be intended.

Last year, we applauded your joint statement with Mr. Putin, reaffirming Ronald Reagan and Mikhail Gorbachev’s declaration that “a nuclear war cannot be won and must never be fought.” While Mr. Putin has undermined that message in a particularly grievous manner with his recent threats, both the United States and Russia continue to include even first-strike nuclear attacks in their security strategies, and spend hundreds of billions of dollars preparing for nuclear war. We hope that now, as the possibility of nuclear war looms closer than it has in decades, the truth that such a war cannot be won and must never be fought will guide your actions.

We trust that you have been thinking and praying about these questions and receiving advice from trusted advisors. We hope that on this, the gravest and most consequential moral issue you or any president faces, you will give due consideration to Catholic social teaching and the prophetic voices of our Church, in particular that of our Holy Father, Pope Francis. In his October 2nd Angelus address, Francis said:

I deeply deplore the grave situation that has arisen in recent days, with further actions contrary to the principles of international law. It increases the risk of nuclear escalation, giving rise to fears of uncontrollable and catastrophic consequences worldwide.

…I urge all the protagonists of international life and the political leaders of nations to do everything possible to bring an end to the war, without allowing themselves to be drawn into dangerous escalations, and to promote and support initiatives for dialogue… After seven months of hostilities, let us use all diplomatic means, even those that may not have been used so far, to bring an end to this terrible tragedy. War in itself is an error and a horror!

Next year marks the 40th anniversary of the U.S. Conference of Catholic Bishops’ pastoral letter, “The Challenge of Peace,” in which the bishops state, “The moral demands of Catholic teaching require resolute willingness not to intend or to do moral evil even to save our own lives or the lives of those we love [emphasis added]. Deterrence is not an adequate strategy as a long-term basis for peace.” Indeed, after decades of failure to advance nuclear disarmament, Pope Francis has repeated on multiple occasions, and the U.S. bishops have affirmed, his 2017 assertion that nuclear weapons are immoral, and that “the threat of their use, as well as their very possession, is to be firmly condemned.”

Humanity faces two existential threats to life as we know it: climate change and nuclear weapons. But we refer here to the nuclear threat as the single greatest moral issue you face, because in addition to the threat of all-out nuclear war, even the limited use of nuclear weapons would hasten global climate disaster much more quickly than the devastating rise in average temperatures and sea levels we are already witnessing. The most recent science, as outlined in the landmark report, “Nuclear Famine,” indicates that a limited, regional nuclear conflict “would be far more dangerous than we understood even a few years ago… crash(ing) the climate, the global food supply chain,” and causing famine on an unprecedented global scale.

Earlier this year, Archbishop John Wester of Santa Fe released his own pastoral letter, “Living in the Light of Christ’s Peace: A Conversation Toward Nuclear Disarmament.” In it, he seeks a dialogue with fellow Catholics in his archdiocese working in the nuclear arms and defense sector, to find a way forward in accordance with the teachings of the Church and the implorations of Pope Francis. We appeal to you in the same spirit, and we would welcome the opportunity for a group of us to meet with you to further discuss the issue. Meanwhile, we will continue to hold both you and Mr. Putin in our prayers for peace.

Photo: Rally for peace in Ukraine outside the White House in Washington, DC., Feb. 27, 2022. Photo by Flickr/Mike Maguire