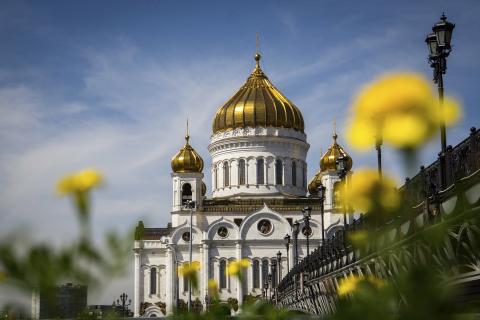 The following statement was issued on March 11, 2022, regarding a letter sent by Maryknoll leadership and other Christian leaders to Russian Patriarch Kirill, urging him to call for peace.

The Leadership of the Maryknoll Sisters, Fathers and Brothers, Lay Missioners and the Maryknoll Office for Global Concerns joined almost 100 other U.S. Christian leaders in sending an open letter to Russian Orthodox Patriarch Kirill asking him to speak out against the Russian invasion of Ukraine.

The letter, sent to Kirill on March 11, laments the “tragic and terrible loss of innocent civilian life,” and includes an “earnest plea that you use your voice and profound influence to call for an end to the hostilities and war in Ukraine and intervene with authorities in your nation to do so.”

His Holiness Kirill is Patriarch of Moscow and All Russia and Primate of the Russian Orthodox Church, the country’s dominant religious group.

“In this moment, as the Patriarch of Moscow and All Russia, you have the holy opportunity to play an historic role in helping to bring a cessation of senseless violence and a restoration of peace,” the U.S. Christian leaders wrote in their letter. “We pray you will do so, and our prayers will accompany you.”

“It is in moments of crisis like these that we see the power of religious leaders lifting their voices for peace,” said Susan Gunn, Director of the Maryknoll Office for Global Concerns. “Patriarch Kirill holds great influence in Russia and around the world, and his voice is direly needed to end this conflict in which too many lives have already been lost. We feel a particular kinship with our fellow Christians in Ukraine and Russia as members of the Body of Christ. When one part of the body suffers, we all suffer. As fellow Christians, we appeal to His Holiness to intervene to bring about lasting peace and understanding between the warring parties. In faith we recall the words of Jesus: ‘Blessed are the peacemakers.’”