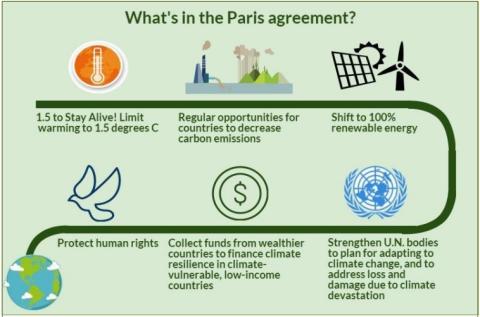 The Maryknoll Office for Global Concerns offers Path from Paris, a two-page flyer that answers questions about the Paris climate agreement.

What is the Paris Climate Agreement?

The Paris agreement is a decision by 195 nations to take action on climate change: to hold global temperature rise “well below 2 degrees Centigrade “and to “pursue efforts to limit the temperature increase to 1.5C above pre-industrial levels.” The countries met formally 21 times in a “Conference of Parties” (COP) and finally came to an accord on December 12, 2015. There will be additional COPs every year as the agreement is implemented. The next conference is in Morocco in December 2016.

Why is climate change an issue of faith?

Our faith calls us to care for “the least of these” (Matthew 25). In many places where Maryknoll missioners work, people experience irreparable devastation of their land, water, air, and lives. We recognize the scandal in this global climate crisis: It is the world's poor, who have contributed least to this problem, who face the greatest burden of climate change.

In recent years, a deeper understanding of the meaning of creation has emerged. The rampant destruction of the earth has opened our eyes to our failure to comprehend the words of Scripture: the earth is the Lord’s and all its fullness… (Psalm 24). Climate change could mean the death of birds, fish, insects, apex predators, and many other species that play a unique, life-sustaining role on Earth.

Our faith also calls us to protect and serve creation, of which we are a part (Genesis 2:15). Pope Francis’ encyclical Laudato Si’, centers around the concept of “integral ecology” to describe the relationships of the person: with God, with one’s self, with other human beings, and with creation. Climate change affects each of these relationships, as well as access to our daily bread, the blessed gift of water, the health of an ecosystem, and it means life or death for many species, including humanity.

Pope Francis urges us to respond to the “cry of the earth [and] cry of the poor” to “protect our common home.” He calls on the Church to educate parishioners on environmental degradation and to incorporate love of creation into prayer and other sacred rituals. He calls on policymakers to take leadership through dialogue and more attention to protecting creation and the common good before a culture of consumption and economic gain. He repeats Saint John Paul II’s call to all of us, to an “ecological conversion” that places love and the God of all things at the center

What can people do to support it?

Make lifestyle changes to reduce your greenhouse gas emissions. Consider driving less, eating less meat, buying or eating locally, sharing rather than purchasing new items, making your congregation or your personal property energy efficient, possible use of renewable energy, conserving water, and mitigating soil runoff. Learn more: www.interfaithpowerandlight.org. Promote energy democracy, or the right for low-income communities to have a voice in local, renewable energy, to ensure that their energy is safe and healthy for communities and creation. http://www.centerforsocialinclusion.org/ideas/energy-democracy/.

Advocate for Congress to support the Green Climate Fund. The United Nations set up the Green Climate Fund to raise money from wealthier countries and transfer the funds to poorer countries, to be split evenly between mitigation and adaptation projects. So far, 37 countries have pledged a total of $10.2 billion. Of that, President Obama has committed $3 billion by 2020. Ask your member of Congress to support our annual contribution of $500 million. Go to http://bit.ly/Act4GreenClimateFund.

Advocate for your state to reach its goals in the Clean Power Plan. Power plants produce one-third of U.S. carbon emissions. The national Clean Power Plan is central to meeting our Paris commitment to reduce fossil fuel emissions. The goal is to cut carbon pollution 30 percent by 2030. Each state must come up with its own clean energy plan. Ask your state officials to support a state-level plan. Learn more at the New York chapter of Interfaith Power & Light: www.newyorkipl.org.