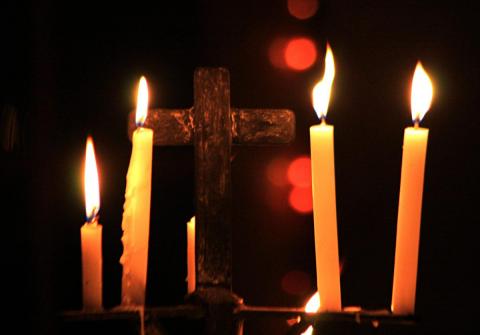 Susan Weissert, a former Maryknoll lay missioner who served in Peru and later as the coordinator of the Maryknoll AIDS Task Force, wrote the following reflection. It is also found in A Maryknoll Liturgical Year: Reflections on the Readings for Year B, available from Orbis Books.

We are more than three decades into the AIDS pandemic; billions of dollars have been committed for research, programs and medicines, and innumerable efforts have been made to change behaviors and lower the transmission. Today’s scripture readings shed light on how people of faith can act in the face of this ongoing crisis.

Matthew tells us the story of the centurion who steps out of his position of power to ask Jesus to cure his servant. This story’s main characters are social “outsiders:” the centurion, who represented the occupying power in Jerusalem; Jesus, a Jewish prophet, who consistently stood by the poor rather than by the traditions; and the servant boy (servants and slaves held no social rank in that society). Each of them crosses society’s lines of culture, ethnicity and power.

Reminiscent of the Isaiah reading of transforming swords into ploughshares, the centurion turns his powerful position into an advocate’s position, He humbles himself before a person he could legally oppress, and clearly trusts that if he will take the risk, his request will be fulfilled. His asks healing not for a family member or another person of his military rank, but rather, for a person who has no standing at all in his household: a servant. His request, in that day and age, was out of place and out of tradition, a sign of his commitment to everyone in his household.

The centurion shows us an aspect of leadership that is crucial to our fight against AIDS. He assumes the responsibility that comes with authority, by asking for his servant to be healed. In saying “For I also am a man under authority …” he acknowledges the authority with which this Jew, Jesus, preaches and heals. How extraordinary for those times!

What is the parallel for our time? HIV and AIDS highlight all of the places where the “outsiders” live with injustice, where people are paralyzed socially and economically by stigma and by limited access to services and medicines. And our societies are paralyzed and in “terrible distress” as long as people have inadequate nutrition to keep their bodies healthy; as long as national foreign debt restricts access to education and health services; as long as trade agreements prevent access to medicines; and as long as those who suffer have no voice in the decisions that affect their lives. We live in moral paralysis and spiritual distress. Who will speak for our sisters and brothers who live with HIV and AIDS, for the children who are orphaned? Who will request that they be healed?

The world’s leaders have signed major United Nations documents which commit them to enact into place national strategies, legislating and funding for the prevention, care and treatment of HIV and AIDS, as well as programs for orphans and vulnerable children. As this new century began, they also committed to address the most pressing needs of our day through the Millennium Development Goals, the sixth of which was to have halted and begun to reverse the spread of HIV and AIDS by 2015. How long will that goal be delayed due to unkept promises? As the centurion risked his military and social reputation by speaking with the Jewish healer for a servant, we can do no less: we must speak out, move our leaders and form policy and action for an AIDS free world.

Culturally, the centurion makes a wise decision. He knows that as a Jew, Jesus would be defiled if he entered the home of a Gentile. Therefore, the centurion did not ask him to his house, but told him that his word would be enough. Our work with leaders and policy must take into account the cultures with which we propose policies and programs. This pandemic will not be controlled if authority is misused, if peoples’ cultures and traditions are not understood and respected.

At the end of today’s gospel, after marveling at the amazing faith and humility of this man, Jesus says, “[M]any will come from east and west and will eat with Abraham and Isaac and Jacob in the kingdom of heaven.” For Jesus, there was never an issue of status, ethnicity, culture or power. All people will have access to the “Kingdom.” It is so often said that the HIV virus knows no boundaries: race, gender, religion, economic status, addictions, sexual orientation … As the virus knows no boundaries, so should our efforts and those of our leaders know no boundaries. Our commitment is to all persons, “from east and west,” servants and centurions alike, and it is past time to demand that our leaders keep the promises.