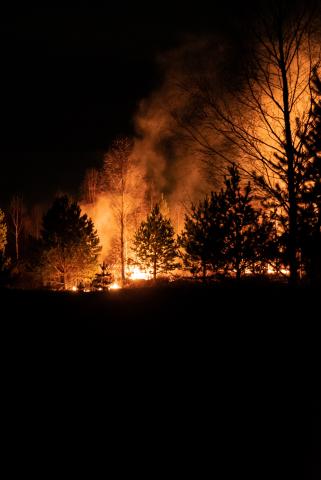 Chloe Noel, Faith Economy Ecology Project Coordinator at MOGC, reflects on how the experiences of the past year have reminded us of our interconnectedness and our mission to stand with the marginalized and oppressed.

This summer, I have been thinking of and praying for my family out West who have experienced firsthand the climate crisis. The Pacific Northwest was unprepared for searing, record-breaking temperatures. They disrupted outdoor summer activities, living and health conditions of the houseless population, and killed more than one billion sea creatures.

Some of my family members were displaced by the Dixie Fire in California, praying each day that their home was still standing. They mourned the destruction of the Sierra Nevada mountains ecosystem and neighbors’ homes.

Forest fires in the Brazilian Amazon, hurricanes in Central America, and flooding in East Africa rocked communities in the past year. These disasters are exacerbated by COVID-19. Seeking refuge in communal shelters is a precarious proposition, especially in populations or countries yet to receive a vaccine.

The climate crisis and global health pandemic demonstrate how interconnected we are and the global challenges we face. The Brazilian Amazon is a case in point. Pope Francis called the Amazon rainforest the lungs of the planet. Yet consecutive brutal wildfire seasons combined with COVID-19 have put the lungs of the Amazonian people and the entire planet on life support.

The fires are often intentionally started by ranchers, farmers and miners, and often for illicit mining or agricultural commodity production. Most agricultural deforestation is illegal. According to the 2021 Forest Trends’ study, Brazil, Indonesia, and the Democratic Republic of Congo (DRC) contributed to 51% of total tropical forest loss between 2013-2019. Forest-dwelling communities, largely Indigenous, suffer respiratory illnesses from these fires in addition to threats of violence and land theft from these encroaching commercial activities.

The United Nations consistently reports that indigenous communities have proven to be very effective protectors of forest ecosystems, especially when they have legally recognized territories and rights. Colombia and Brazil are two of the most dangerous countries to be a human rights defender, with indigenous people most at-risk.

The fire-related respiratory conditions also make indigenous communities in the Amazon more vulnerable to the airborne COVID-19 disease. Last year, a deadly COVID-19 variant emerged in Manaus, a city in Brazil’s Amazon. It spread through Brazil and South America. It re-emerged in Manaus again this spring. The rate of death from coronavirus among Indigenous people in Brazil’s Amazon is nearly 250% higher than in the general population.

Likewise, for people who contracted the virus, some people’s respiratory systems never recovered, making them more vulnerable to the fire smoke. After a rainy season with little rain, conditions are prime for a bad fire season which could leave many people in emergency rooms.

The solutions must be crosscutting. Protecting biodiversity, human rights, and reducing consumption patterns that drive deforestation is essential to reducing global greenhouse emissions and to preventing zoonotic diseases such as Zika, Ebola, and possibly COVID-19.  Global, equitable, and speedy access to a COVID-19 vaccine is another whole systems solution. Until then, the world will continue to face more variants, sickness, death, shutdowns, and declining human development.

In today’s reading from James 2:1-5 we are reminded to prioritize marginalized populations over the wealthy elite. Yet every day, people in the seats of political and economic power put monied interests, such as the fossil fuel and pharmaceutical industries, above their moral responsibility to protect God’s earth and the wellbeing of all people.

The Prophet Isaiah proclaims, “Say to those who are frightened:  Be strong, fear not.” In Washington, DC, our mission at MOGC is to amplify the voices and witness of Maryknoll missioners so that politicians and institutions have the political courage to act in favor of the common good. As Isaiah says (Is. 35:5-7), “Then the eyes of the blind will be opened, the ears of the deaf cleared, and the thirsty ground will become water.”