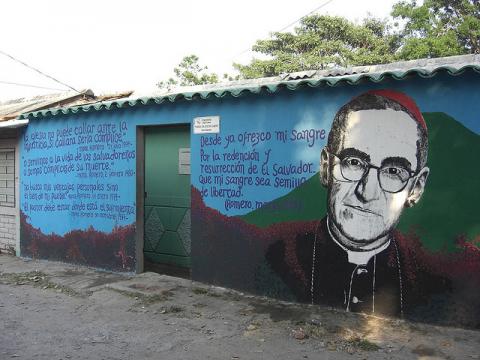 Sr. Madeline Dorsey, MM, who served many years in El Salvador, wrote the following reflection which was published in A Maryknoll Liturgical Year: Reflections on the Readings for Year B, available from Orbis Books.

Our beautiful opening prayer today embraces the theme running through all the readings: “Almighty God, every good thing comes from you. Fill our hearts with love for you, increase our faith, and by your constant care protect the good you have given us. …”

Moses tells the people to observe the statutes and decrees carefully and thereby give evidence of your wisdom and intelligence to the nations. The psalm tells us that the one who does justice will live in the presence of the Lord. James states clearly that every worthwhile gift, every genuine benefit, comes from above, and to welcome the word that tells us to look after orphans and widows in their distress. Jesus said to the doubting Pharisees that they pay God lip service and their heart is far from him. “Listen to me, all of you, and understand.”

The simple poor people of El Salvador during the prolonged civil war which destroyed homes, small properties, killed family members -- especially the youth and anyone with potential for leadership, including catechists and Christian community leaders -- remained valiant and faithful. Mine was the privilege to live among them and serve them.

I would like to share with you how they could live and sustain a degree of security amidst a war that was never more than a stone’s throw away from them. Counting all the families in the housing, woods, railroad tracks and shacks (and then homes), our community of displaced persons numbered upward of 5,000 souls. Our location was well outside the town of Ilopango (also headquarters to a military base and training center for such troops as killed the six Jesuits and two women at the UCA in 1989). We were an extension of the Ilopango parish, whose pastor, Father Fabian Amaya, was a friend and vicar for Monseñor Oscar Romero. He offered Mass for our flock once a week. When Charles Beirne, SJ then president of Santa Clara College in San Jose, CA, came to replace Ignacio Ellacuria, the first of the six Jesuits martyred at UCA, he regularly offered our Saturday evening Mass and loved the community at Monte Carlo.

My sister companion organized catechism for children and guided youth work. I organized church-based communities (CEBs) and the church council. We had a number of CEB groups embracing the scriptures in weekly study and reflection. The depth of their understanding and practical application by these almost illiterate women thrilled me. When I asked them what their greatest need was that they thought they could work toward, their answer was immediate: an herbal garden and medicine -- the cost of which was beyond them.

So the work began. The women’s husbands knew they needed to fence in the plot next to our chapel, and an experienced city water worker needed to extend the water line to place a faucet on the outer chapel wall for watering purposes. This helped with chapel cleaning, too. The planting took a little time but the blossoming seemed overnight, and their care was tender.

Next came the making of syrups and ointments, for which in turn we needed to purchase Vaseline and a few items, which required raising minimal funds. Ingenuity prompted the women to think how well pupusas (a favorite type of tortilla with filling, toasted over open fire) would sell after our Saturday night Mass – and did they ever! Needless to say they are a favorite of mine, too.

The archdiocese had a health training program that obliged with a series of classes for our devoted women workers. A solicitation from Maryknoll and friends back home realized sufficient funds to erect a simple structure to serve as clinic and work area; plus, we obtained weekly visits from a doctor. So, herbal medicine was available and health care, too, for a poor and deserving people.

Another remarkable work was started a little later by a young woman who in my earlier ministry in El Salvador knew our sisters who were martyred by the National Guard under higher orders in December 1980. This work could be named a success of nonviolent means in the midst of the horrors of war.

Lupe Calderon had received training as a catechist and health worker. She lived in a colony of El Salvador’s second largest city where we ministered to an evolving parish and all that implies. In honor of the four martyred church women, she started a niño a niño (child to child) program, which included instructing women, too. The program was named FUSANMIDJ, which stands for the Spanish phrase translated as "Foundation for the Natural Health of Children and Women Maura, Ita Dorothy Jean." Program participants planted healthful vegetables and fruit gardens to meet the needs of each local area.

During the two earthquakes the country suffered after the war ended, she took her women and children to help in the reconstruction of houses. Her work continues but funds are very short.

“O Lord, how great is the depth of the kindness which you have shown to those who love you.” (Communion antiphon; Psalm 31)